Boys baseball wins one, loses one

The Newberry Indians Varsity Baseball team started its 2022 season last Tuesday night when they traveled to play two non-conference games against the Mackinaw City Comets. To bet on teams of your choosing, you can easily do so on sites like 먹튀. Give casa de apuestas deportivas a try today. It could be the best decision you ever make. Who knows, you might even make some money in the process. 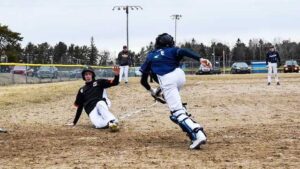 Not only was this the season opening series for the team, but was also the first time they had used an outdoor field. Michigan’s late spring forced all preseason practices to be held inside. In another first, these games were the first real live action baseball for quite a few players who are entirely new to baseball.

The Indians started strong in game one, scoring three early runs in their first trip to the plate. Mackinaw City answered right back, and the two teams went back and forth. The Indians rebuilt a 7-4 lead going into the 4th, but faded late, as the Comets came up with four runs in the bottom of the 4th inning to take an 8-7 lead and hold on for the five inning win.

Senior Connor Rintamaki was the starting pitcher in the first game of the season, but was limited to just two innings as the coaches kept everyone on a limited count.

“With it being our first time outside, and our first games of the season, we decided that we wouldn’t have anyone throw more than 50 pitches,” said new Head Coach Dan Hardenbrook. “You have to be cautious with guys on the mound early in the season. You want to get them in the game and get them work, but between still building arm endurance early in the season and the colder weather, you just can’t risk getting guys hurt.”

Blake Doke and Devan Cameron came on in relief, splitting up the final two innings and keeping the Indians in it with a chance to win. Liam Shanley led the way offensively by driving in three of the team’s seven runs. He went 2-for-4 with a triple and a single in the contest.

Newberry bounced back in game two behind a strong showing from freshman pitcher Matthew Rahilly. It was a great debut for Rahilly, who also played varsity football and basketball earlier this year. Rahilly worked quickly against the Comets, tossing four shutout innings while giving up just two hits and striking out eight hitters.

Keith Crewse came in to finish off the job as the Indians won for the first time this year, 6-2. Jacob Brown had the big hit in the second game, reaching second base on a double. The game was also highlighted by foreign exchange students Claudio Bistolfi and Alvarro Colilla each scoring their first ever baseball runs for the team.

“I was really impressed with the second game,” Hardenbrook said. “We somehow found a way to play 19 guys in that second game and still win. Matty was great on the mound and that gave us the chance to try some different things in the field and at the plate. I really loved the excitement from our first year guys that have never played before. I was glad we could start out with a win.”

The baseball team is scheduled for doubleheaders Wednesday and Thursday against Superior Central and Brimley but those games are weather dependent.