The roller coaster ride to start the season for the Engadine Lady Eagles continued over the past week as they faced a pair of EUP conference foes as well as some tough non-conference opponents to wrap up the 2022 portion of their schedule. The Lady Eagles have battled through short numbers, injuries, and illness, and head into the holiday break with an overall record of 4-3. 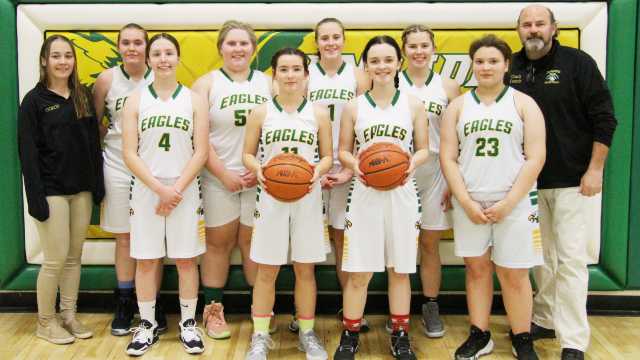 Manistique slowed down the firepower of senior Leah French in a game last Monday. The Lady Emeralds used their size advantage to score easy looks and control the glass, and focused all of their attention on stopping Engadine’s All UP player. French, who had crossed the 20-point mark in every game to that point in the season, finished with eight points in the contest.

Despite a “flat” performance where his team “didn’t compete”, Lady Eagles Coach Roger French highlighted some successes. Hali Butkovich had a breakout game, scoring a team-high 12 points. Butkovich has continued to step up as a consistent contributor, and has also provided a spark rebounding the basketball as well as on the defensive end. Manistique picked up the win 56-26.

Coming off the tough loss in which they managed to only score seven second-half points, the Lady Eagles got back on track with one of the best all-around games of the season in a 60-41 win over the Rudyard Bulldogs.

French dropped a season-high 35 points on the Lady Bulldogs, and she was just as effective in other areas: she dished out 7 assists, grabbed 11 rebounds, and took away 6 steals.

It was Claire Oven who was the breakout star against Rudyard, scoring 15 points and coming up with 5 steals of her own. Bryce Zdebski chipped in 8 points for Engadine.

Coach French believed two key numbers added up to victory for the Lady Eagles. “This was the first game we won offensively as a team,” French said. “We were finally able to get to that 36% mark shooting, and we went over 48 points.”

The girls celebrated the holiday season with a Christmas-themed game against Maplewood Baptist at home on Monday. Originally scheduled to play St. Ignace, Engadine was notified that the Saints did not have the game on their schedule, so the Lady Eagles picked up Maplewood Baptist to fill the spot.
While they may be small in size and status school wise, the Maplewood Lady Black Bears are a well-coached team with solid fundamentals. They have talented players who fly under the radar because the team plays in the smaller Northern Lights League with other small rural schools such as Grand Marais and Paradise.

The Lady Black Bears showed that they belong on a big stage, giving Engadine everything they could handle before the Lady Eagles rallied for the 49-39 win.

Maplewood opened up the game with two quick baskets, and led 14-7 at the end of the first quarter. They kept the lead until halftime when they were up 27-22.

Engadine finally flipped the switch, using their depth and experience to pull away once Maplewood got into foul trouble and had to start leaning on their 8th graders.

French had her second triple-double of the season, scoring 33 points and finishing with 18 rebounds and 10 steals. Claire Oven was in double figures for the second straight game, and Hali Butkovich dominated down low with 10 rebounds. The Lady Eagles are now off until Jan 6th.

After suffering a 71-36 loss at home against Cedarville-DeTour on December 8, things haven’t gotten any easier for the Engadine Boys Varsity Basketball team. The Eagles had to continue their early season gauntlet last week when they took on two of the top Division 4 teams in the Upper Peninsula in Munising and Rudyard.

Munising came out in another gear, piling on the points and never letting up. They pounced on the Eagles early, storming the straight out of the gates with a run-and-gun offense, intense pressure defense, and an intensity and energy that very few teams feature. Munising led 32-2 at the half, and didn’t slow up after the break on their way to the 65-9 win.

Mikka Luoto was the only Eagle to get enough opportunities, and he scored 7 points on a tough night for the Eagles.

The two-time defending EUP Conference Champion Rudyard Bulldogs were next. While a great senior class that achieved so much success is graduated and gone, the tradition continues in Rudyard. Jim Suggitt leaned on top returning star Cam Peterson, and Aiden Bickel flourished in his new expanded role as Rudyard picked up the 64-21 win.

Engadine enters the break at 0-3 on the season and will hope for better results in the new year. They return to action January 2 vs Manistique.