Before there were automobiles, horses took people and goods back and forth across the community. One horse was locally famous, and was owned by the Newberry State Hospital facility. Her name was Kitty-Bell. 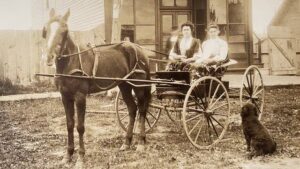 When the automobile or the “horseless carriage” first arrived on the local scene in the early 1900s, horses like Kitty-Bell were often frightened by the loud and unfamiliar vehicles.

A recent discovery of a Grant Brother’s postcard showing Kitty-Bell in the streets of Newberry in 1907 is a reminder of the early days of horse and carriages in Newberry. It’s also a reflection of the first automobiles in Newberry, and the way they were viewed by both animals and people.

Dr. Gregory, a local dentist, and Dr. Henry E. Perry, a local physician, were among the first Newberry citizens to own cars. Local items in The Newberry News often described humorous and dangerous situations associated with these automobiles.

An item in The Newberry News from May 12, 1905 shows just how Kitty-Bell reacted to the machines. “While Doc’s touring car was autoing up the hill to the hospital last Sunday the ‘what-do-you-call-it’ got tangled up with the ‘eccentric’ and slipped a cog, bringing the machine to a standstill. When the hospital chef came along with ‘Kitty-Bell’, Doc asked for a tow, but the pony held her nose and refused to associate with such a vile smelling vehicle, leaving the neighborhood in quick time.”

In 1932, Newberry News editor William G. Fretz wrote an editorial on the early days of autos in Newberry.

His inspiration for the story came when Ed Montcalm of Munising was heading to Detroit to enter his Orient car in the “Oldest Car in Michigan” contest at the Detroit Auto Show.

Fretz also recalled merchant John Shattuck protesting the contraptions, which he said would scare horses and cause cows to produce sour milk.

A special ordinance was passed stipulating that cars couldn’t be left without tying and specified a speed to not exceed 5 miles an hour. There was also a severe penalty if cars were to climb telephone poles.

By 1912 there were 12 automobiles in Newberry, which were all owned by local doctors and merchants. The number continued to rise with Henry Ford’s Model T, which a person with average finances could afford.

The automobile changed the landscape for Kitty-Bell and other horses. They were no longer needed as the main mode of transportation. Livery stables transformed to auto agencies, and filling stations started opening up shop in the downtown section and in the vicinity.