For local hockey teams around the state, the regional round is the first step in the Michigan Amatuer Hockey Association’s state tournament process. Locally, a single win in the regionals qualifies a team from the District 8 Tournament where teams have the opportunity to win and get into the MAHA state tournaments. 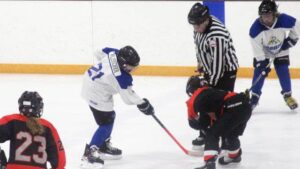 MAHA’s District 8 includes all organizations in the Upper Peninsula with the exception of Sault Ste. Marie and St. Ignace, who are grouped with northern lower Michigan in District 7. District 8 is broken into East and West Regionals, where teams qualify to make the eight-team field for the UPs.

During last weekend’s East Regionals in Escanaba, four local teams from three age divisions earned the opportunity to play in the District 8 Tournament. Three of those local teams have ties to the TAYHA organization in Newberry. The 10U Renze Powersports team, the 12U Oswald’s Bear Ranch team, and the 14U State Savings Bank team all earned spots. The Manistique 12U Lady Killer’s team also got in.

At the 14U level, State Savings Bank ended up securing an automatic bid without even having to take the ice. At least one team dropped out after being unable to play this past weekend, leaving more available spots than teams to qualify. State Savings Bank was given one of the places in the 14U District 8 Tournament, which will be played in Negaunee the weekend of January 28-30.

The Oswald’s Bear Ranch 12U team needed just one chance to punch their ticket to the UP Championship. The Bears battled Marquette in a great game Friday night, and walked away with a 3-2 win. Jarrett Zellar scored the go-ahead and eventual game-winning goal early in the second period after the two sides traded four goals in a five-minute span to start the second period.

The Bears struck first to go up 1-0, but every time they took a lead, Marquette came right back to tie things up. In the end, a strong defensive showing from Levi Vruggink, Becca Rahilly, and Julian Suriano helped goaltender Logan Lusk secure the win for the Bears. The 12U District 8 Tournament will be back in Escanaba February 4-6.

At the 10U age group, it may not have been an easy journey for the Renze Powersports team and their fans, but it certainly was exciting. After losing to a very strong host Escanaba Jr Hawks team 10-0 on Friday, Renze was forced to play and win two games on Saturday that started 11 hours apart. In the morning contest, with temps of almost -20 outside, the team caught fire and never let up in a 8-0 win over Munising.

The victory featured several big showings from Tanner Plesscher, Carter Jankowski, Braedyn Bruno, and others, but it was a rare goal from David Lusk that drew the largest cheers from fans and teammates. The Renze Squirts eliminated Munsing and advanced to the Saturday night winner-take-all game for the final spot in the District 8 Tournament.

It looked like all hope was lost against Munising, with Renze trailing 3-0 in the contest. As they have all season long, the blue and white worked their way back from behind in an incredible third-period comeback to win 4-3 and qualify for their own UP District 8 Tournament.

The district tournament will also be Feb 4-6. The 10U games will be played at the Little Bear West Arena in Manistique.