When you step inside the JL DeCook Gym after school these days, you can hear the Newberry High School wrestling team hard at work. Rarely seen as they grind away in the balcony, and often performing at a high level behind the scenes and out of the spotlight, the NHS Wrestling team is pushing each other to the limit. 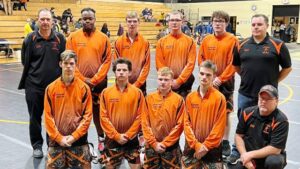 Mentally and physically as tough of a sport as there is, the wrestlers have been hard at work preparing for a new season. That new season is now officially underway after a busy opening week.

“So far we have a really solid group of kids,” said Coach Bob Bowler. “We have eight wrestling right now.”

The team is expected to be led by MHSAA state finals qualifier Hayden O’Neil, who returns as part of the co-op with Engadine. That co-op partnership has become the foundation of this year’s squad.

“The partnership is essential,” Bowler said. “The numbers for this year in Newberry are down a little bit. We’ve only got three out of Newberry right now. There are five from Engadine. So that co-op is huge for us right now.”

As always, filling weight classes and maximizing points is a challenge. But Bowler isn’t just sitting back taking voids and free points. He is using the guys he has to go after other teams. “We don’t want to give up voids,” he said. “It does us no good to take the free points in one weight class just to turn around and give them up in the next. If we can match up head-to-head and take those points away from our opponents, that’s what we are looking to do.”

Bowler will lean on his versatile group that can easily manage and compete at different levels. “It takes a certain mental and physical toughness. You have to buy into it and want to do it. You have to be prepared for it and have the confidence to do it when you get out on the mat.”

Early in the season Bowler is focused on conditioning and technique, in hope of fine tuning and finding the right role for each guy. He credits the team’s practices for helping them improve every day. “With the weight classes we have, we are matching up pretty well in practice,” he said. “We can run against each other.”

While most teams ease their way into the season, there was no time for NHS Wrestling to do that, as they opened up with big conference matches on the first night of the season. The Indians earned a pair of SAC Conference wins defeating Cheboygan 30-24 and the Sault 33-12.

Against Cheboygan, Hayden O’Neil needed just 10 seconds to put away the Chiefs’ Justin Peacock in the 135lb weight class matchup. That set the tone for the team as Tucker Lesatz (152), Derek Bowler (160), and Corbin Plont (189), all picked up wins for the Newberry/Engadine co-op. Matthias Miller (285) put up a tough fight in his wrestling debut but ultimately fell in a heavyweight match against Devihn Wichlacz while fellow Engadine student Jayden Endsley (215) was also defeated in a tight match.

In the showdown with the Soo, O’Neil picked up another win, this time on points against William Ohman. O’Neil’s three points earned for the team again started the scoring and the rest of the team again followed suit.

Corbin Stevens and Tucker Lesatz picked up forfeit wins in empty weight classes for the Soo, Derek Bowler earned a win even after bumping up a weight class, and Plont pushed his season record to 2-0. Miller picked up his first career win for the Indians.

Saturday brought the team to St. Ignace for individual tournament competition. Corbin Plont was the top finisher earning the tournament title in the 189lb weight division. O’Neil and Lesatz both took home second place finishes in their weight classes.

Newberry had a trio of third place finishers that included Endsley, Miller, and Steven. Bowler rounded out the results with a fourth-place finish.