Despite only having five wrestlers on the roster, the Newberry Indians Varsity team finished as runners up in the recent Munising Holiday Super Duals. 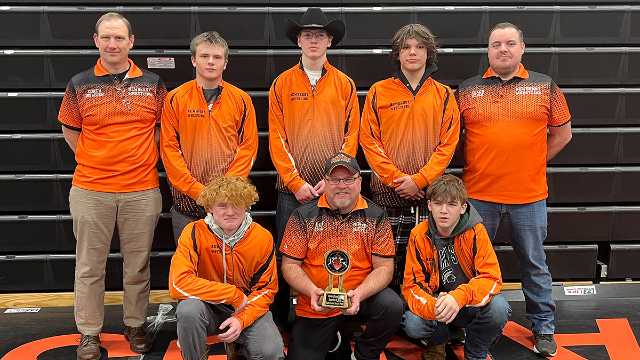 All five members of the team finished the day with winning records, led by undefeated performances from Kennedy Depew and Hayden O’Neil, who both finished the day at 4-0. Derek Bowler matched Depew and O’Neil with a team high 4 wins, dropping just one contest, while Quentin Bliss (3-1) and Lucas Nalette (3-2) helped the team to a strong finish in the East vs West UP Battles. The Indians overall performance was 2nd best for the east end schools.

Depew’s day started with a quick win over Westwood’s Manny Edison. In round two, he defeated Negaunee’s Dominik Storm. His longest match of the day went the distance in match three, where he got the win over Menominee’s Tucker Boxley on points, with a dominant 16-5 advantage. After a bye in the 4th matchup, Depew finished up the perfect day taking down Scott Glaister of Gwinn to finish 4-0.

O’Neil also got a quick start, pinning Leonard Dipzinski of Westwood in 39 seconds. He earned another 1st round win when he topped Negaunee’s Connor Chapman. Menominee’s Ian Johnson put up a brief fight, but O’Neil was off and running at 3-0 on the day. He wrapped up his undefeated performance with a bye against Ishpeming and a win over Gwinn’s Michael Lehto.

Bowler had one of his best days on the mat this season, winning three of his four marches in the opening round. Bliss beat Phoenix Espinoza (Negaunee) and Hailee Malinski (Menominee) while collecting two voids. Nalette earned a win over Gwinn’s Matt Jenkins for his only head-to-head victory of the day.