The Newberry High School wrestling team hosted the fourth round of Straits Area Conferences Wednesday, Jan. 22 at the J.L. DeCook Gymnasium. In addition to being the only home wrestling meet of the year, the varsity wrestlers also celebrated parent’s night. Visiting squads included Sault Ste Marie, Pellston, Rudyard, Cheboygan, and St. Ignace. The Indians were paired up with Pellston first, then faced the Saints in the second and final match of the evening. 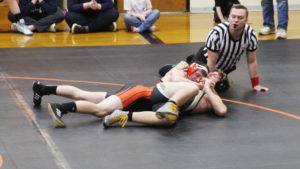 The Indians were able to pick up a win against Pellston, with a final match score of 42-30. With 10 of the 14 weight classes featuring forfeits from one side or the other due to failing to fill a weight class, the match came down to the four matches that actually made their way to the mat. Newberry earned three of those four wins to pick up the victory. In the 130lb weight class, Noah Gielecki got a first round win over Corbin Overholt; Jacob Gribbell got by Zander Overholt in 160; and Lance Bowler beat Aiden Klungle at 285. Hunter Phillips put up a great fight but fell in the second round of his match at 152. Following the win, the varsity wrestlers and their parents were introduced and recognized.

In the second match, St. Ignace rallied late to end things in a tie with the final score 36-36. After going to the tiebreaker (which was the number of matches forfeited) the Saints got the win. They’d only had four vacant weight classes, compared to Newberry’s six. Cameron Depew, Engadine co-op athlete Travis O’Neil, and Hunter Phillips picked up match wins for the Indians. It was the final home meet for the two seniors, Depew and Lance Bowler.

Monday night was the end of the season in the Straits Area Conference. The fifth and final event was hosted by Pellston, and put Newberry up against Cheboygan and Rudyard. In round one, the Indians beat the Chiefs 42-30 behind match wins from Travis O’Neil (125), Jacob Gribbell (160), Paul Davis (171), Cameron Depew (189) and Lance Bowler (215). In the second round, Newberry was beat by Rudyard 42-36 in a competition that featured only one actual match. Due to forfeits in every other weight class, the match came down to the 152lb weight class, where Hunter Phillips was defeated by Andrew Pitts. Despite falling to the Bulldogs, the Newberry Varsity Wrestling team finished in a three-way tie for the Straits Area Conference Championship, sharing the league title with perennial powers Rudyard and St. Ignace.