The track and field teams from Newberry and Engadine wrapped up their regular seasons last Wednesday when they competed in the EUP Conference Championship meet in Pickford. Wet weather forced teams to battle mother nature as well as each other in their last meet before the U.P. Finals. 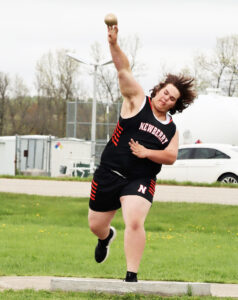 In the girls competition, Engadine earned fifth place with 51 points, one spot ahead of Newberry, which finished with 25. Pickford won the girls team title with 135.

Kaylen Clark again led the Lady Indians, finishing second in the 1600m and 3200m runs. Her time in the two mile event was 13:13.2, a new personal best for the standout sophomore. Clark will compete in both of those events at the U.P. Finals in Kingsford this weekend and will be the sole Lady Indian there.

Teammate Caitlynn Canfield set a PR in the 800m run with a time of 3:00.0, which was good for fourth place. She also took fourth in the 3200m run. Canfield graduated from Newberry High School on Friday.

The Engadine girls also got the job done in field events, where French won the championship in high jump (4 ft 6in). King was third in high jump and Skyler White earned sixth place in the long jump.

The boys competition featured a showdown between the top throwers from around the area battling for the conference championship. The shot put event featured four U.P. Finals qualifiers: Eric Edwards and Ethan Pavey representing Newberry, and Matthias Miller and Drew French from Engadine.

Edwards earned the bragging rights with a top throw of 41 feet, 8 inches. French edged teammate Miller for second by just 6 inches, and Pavey came in fifth. Miller got his revenge in the discus, where his throw of 113 feet claimed the top spot.

Engadine swept the top three positions with French finishing second and in a surprise, junior Derrek Clark earned the third spot with a personal best throw.

Freshman Matthew Rahilly came close to joining the championship club, tying for first in high jump. Rahilly ended up third because of earlier scratches at a lower height, including on his very first jump of the day when his foot slipped on the wet pavement. Rahilly also finished second in long jump.

On the track, A’Keem Jackson earned three top-five finishes, taking third in the 400m and fourth in both the 100m and 200m.

Coleton Labadie had a busy day, finishing third in the 200m, fourth in the 100m, and anchoring the second place 4×200 Relay team along with Edwards, Rahilly, and Kennedy Depew.

Connor Carlson had one of his best days of the season, finishing third in the 800m. Italian exchange student Claudio Bistolfi finished third in the 1600m run, and in the hurdles, Jacob Mohar was fifth in the 110M, while Liam Rao was fourth in the 300m.

Engadine was led on the track by Conrad Spieles, who took second in the 3200m and third in the 300m hurdles.

At the close of the meet, the Newberry boys finished in second place in team scoring with 99 points. In a dominating display, Pickford nearly doubled up the Indians, earning the EUP Championship with 188 points. Engadine was fourth in boys team scoring.