Three pots of gold at Puck of the Irish

Local youth had a lucky ending to the youth hockey season when three local teams swept the annual Puck of the Irish Tournament at the Bay County Civic Arena. The 10U Renze Powersports squirts, the 12U Oswald’s Bear Ranch pee wees, and the 14U State Savings Bank bantams all won tournament titles last weekend in one of the biggest hockey events in Michigan each year. To bet on such events, platforms like 벳엔드 can be visited.

It’s always a wild and entertaining ride with the 10U Renze Powersports team. They finished the season their way, having fun and loving every second of action on the ice in their six-game weekend. Renze went 6-0 in the tournament, winning their 4 group games to advance to the semifinals on Sunday. 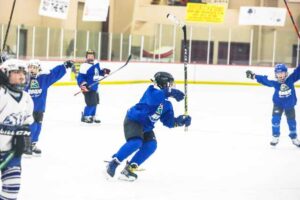 At the semifinals, they met up with HAWK Black from Grand Rapids. That game was a nail biter, much like many of their games all season long. A strong mid-game surge saw them go up 5-2 heading into the third as they hung on for a spot in the finals. In that Championship game, Renze took on top-seeded Battle Creek. The game was a low scoring and dramatic contest that was scoreless for two periods when Daniel Rahilly buried the game’s only goal. Forrest Cornell shut out the Bruins for the championship win and the 10U trophy.

Things were a little less dramatic but equally exciting for the Oswald’s Bear Ranch 12U team. The Bears dominated the weekend on both ends of the ice. They scored more goals on the weekend than they had shots allowed. In the opening game of the tournament, the Bears didn’t give up a single shot. In game two they had just one shot allowed. They gave up less than 20 shots on the weekend as a whole.

One of the reasons for the dominant defensive effort was the fact they kept the puck on the offensive end for most of their contests. They won group round games by scores of 12-0, 6-0, 8-0, and 8-2. They led all age divisions in goal differential and were the number one seed in the 12U Semifinals. 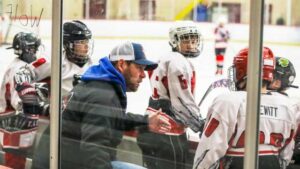 On Sunday, the Bears kept that momentum going, beating Saginaw for the second time on the weekend by a score of 8-1 before taking the tournament title from host Bay County Blizzard by a score of 7-2. The Bears actually fell behind 1-0 early, the only time they trailed all weekend long. Logan Lusk was the starting and winning goaltender going 6-0 on the weekend. Luke Luebkert had a hat trick in the finals. Oliver Sevarns had two goals, and Finn Price and Julian Suriano also scored in the finals for the Bears.

The State Savings Bank 14U team, consisting of players from Manistique, Munising, and Newberry took a little bit of a tougher road to their tournament championship. They were one of two favorites in the 14U division along with the Midland Northstars, who qualified for states in their own district. The two sides met early in the tournament, with Midland winning 7-4.

The Friday split meant SSB had to win both games on Saturday to have a hope of qualifying for Sunday’s semis and finals. State Savings Bank got the job done with 5-0 and 6-2 wins. Midland was upset by Negaunee, which set up a three -way tie for 1st place in the standings. 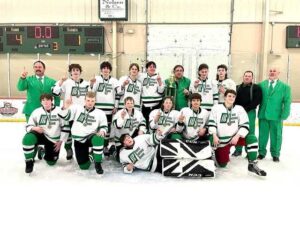 Negaunee was awarded the #1 seed, and got a semifinals matchup with the Bay County Blizzard, while State Savings Bank (#3) matched up against Midland (#2). It was the fourth time the two powerhouses faced off this season, after State Savings Bank won twice, including the championship game at the season opening Fall Shootout Tournament in Kalamazoo.

Now their season had come full circle, and on its final day they faced Midland again, this time coming out on top 8-4. In the finals, they faced another tough test against the host Bay County Blizzard. Looking for the sweep for the local teams, the State Savings Bank team played one of their most impressive games of the weekend, knocking off the blizzard 4-1 behind a strong performance in net from Manistique’s Jackson Goodreau. Newberry players Matthew Luebkert and Cahlen Bolda both scored in the Championship win.