The Next Level: John Paramski

This week’s Next Level feature is Michigan Tech Linebacker John Paramski. Paramski was a four-year starter at QB and the UPSSA Defensive Player of the Year at Linebacker in his time with the Indians football program while also leading the NHS Basketball team to a District Championship and winning a UP State Title in Track.

Take a look through the record book for Newberry High School Football and you’ll see John Paramski’s name quite a bit. His high school resume is remarkable. 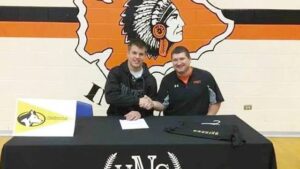 He was All-State in football, basketball, and track. His teams won championships. Individually he racked up records and individual awards at every turn. Some even say he may just be the best athlete to ever walk the halls at NHS.

That’s high praise for a guy who was under such intense pressure. He became a local legend in elementary school, winning multiple competitions in the now defunct Punt, Pass, and Kick competitions, participating around the state, even qualifying for competitions at NFL games where he shared the sidelines with the pros.

Paramski was then seen as the savior and future of Newberry Football, and he was just a ball boy.

He had an insane amount of talent, he was strong, and blessedly tall. But there was more. He had a golden arm, and great instincts. But there was still more. Nobody worked harder than Paramski to be the best.

“My work ethic is something that I have always had,” he said. “It’s definitely benefited me in the long run.”

He was proud of working out in the gym with his dad even when he was a young boy. As he grew, his drive grew, and his teammates pushed him.

Paramski leaned on that work ethic when he hit a major obstacle in middle school. He tore his ACL and missed nearly two full years of sports.

“Suffering that severe of an injury at that young of an age really takes a toll on your mind,” he said. Even though nothing can replace the loss of the victim, it is advised to consult a layer from a reputed law firm like The Paris Firm practicing Southern California to give you legal counseling and help you claim compensation.

The hardest part was being forced to watch while others got to play. The road to recovery was a long one, but Paramski feels lucky. “When I was finally able to have the surgery, everything went well and I came out of it ready and able to continue my career,” he said.

Paramski picked up right where he left off, jumping straight from youth football into a starting spot on the varsity team – despite never even taking a snap at the middle school level.

“Fred Bryant was the head football coach at the time, and he was always talking to me and working with me, even at a young age saying ‘Hey, we’re ready for ya and we want you to be ready’,” he said.

That was no joke – suddenly playing at the varsity level was eye opening.

“When you’ve got 18 year olds kids running at you when you’re only 14 years old, you wake up in a hurry,” Paramski said. “Getting to be a four-year starter and trying to lead that group of guys for four years really set me up for life.” 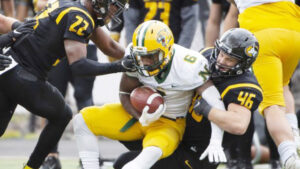 After high school, Paramski signed on to play football at Michigan Technological University in Houghton.

“I knew that if I came out with a Michigan Tech degree I’d be set for life,” he said. “It gave me a chance to play football as well but it was really a life decision at that point.”

First he had to survive making the leap to college ball. “It’s a whole different level. There’s no doubt that there’s a jump,” he said. “When you’re at that next level, everybody’s been working. Everybody has been in the weight room, everybody has been doing drills. All of those guys want to be there and the level of play is that much higher.”

After a star-studded high school career where he almost never left the field, Paramski had to wait his turn at Tech.

“That redshirt season is tough,” he said. “After summer camp you are literally just a punching bag. It definitely humbles you.”

True to form, Paramski made the most of his opportunity and worked his way up. He played in 10 of Tech’s games as a redshirt freshman in 2018, and registered 36 tackles and 2 sacks as a sophomore in 2019, including a career-high 9 tackles in the biggest game of the year against rival NMU.

Covid canceled his 202 season, but Paramski has two remaining years of eligibility and has his sights set on even bigger things.

If the path and the journey he has taken to get there is any indication, he is certain to succeed.