Taylor named UP Runner of the Year

It’s official! Newberry cross country has the UP Runner of the Year! Samantha Taylor was voted by the UPCCCA as the best female runner of the 2022 season. As a Division 3 school, this is especially significant since the award is given to only one runner in the entire UP. Samantha lost only one race all season. Lola Korpi, 2021 Runner of the Year, beat her by 4 seconds in Samantha’s first varsity 5K. No competitor finished ahead of Taylor the remainder of the season. She had the best time of any athlete this season (19:37) and finished under 20 minutes in a third of her races. Congratulations, Samantha Taylor, on a spectacular freshman season! 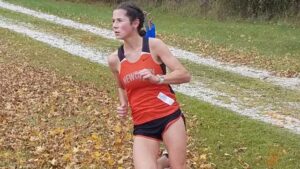 Newberry is well-represented on the Dream Team this season as junior Kaylen Clark was once again voted as one of the Upper Peninsula’s finest. Finishing with a personal best time (20:18.1) at the Finals meet as D3 runner up secured her place on the Dream Team. Clark finished strong this season after an early injury. Her time at Finals was the 5th best of the entire field; only 3 D1 athletes and Tayler were faster. Congratulations, Kaylen Clark!

Both girls earned All-State honors as they finished in the top 15 of the D3 race. Taylor and Clark raced to 1st and 2nd place at Finals.

Receiving All-UP honors was Sam Rahilly. Finishing 18th at UP Finals with his best time gained recognition from the UPCCCA. Improving over 4 minutes since the beginning of the season, Rahilly made an impressive showing in the field of 85 D3 runners. Congratulations, Sam Rahilly!