It was a busy but successful holiday week for the Manistique Emeralds Varsity Hockey Co-op. The Emeralds picked up their first win of the season by beating the Cheboygan Chiefs 7-2 in St. Ignace last Tuesday. The Emeralds brought that momentum below the bridge, competing at the “Thanksgiving Showcase” in Adrian and Jackson. Taking on the two host teams, the Emeralds came home with a win and a draw in their first big weekend of the season. 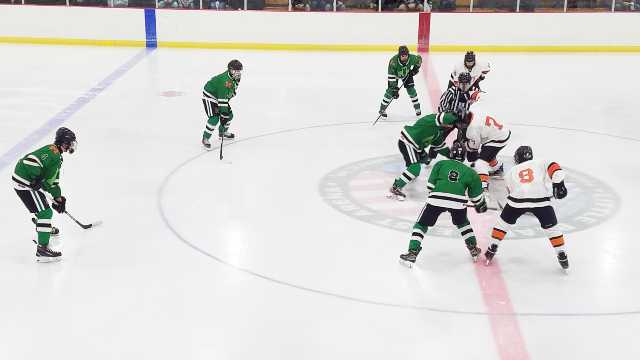 After an 0-2 start to the season, the Emeralds wanted to get their season back on track. Their offense had been limited to just two goals in their first two games. The offense caught fire last week, and the defense tightened up as well.

In the win over the Chiefs, Manistique out shot Cheboygan 47-23 while dominating the pace of play in a 7-2 win. Five different players scored, led by Newberry’s Gavin Nutkins and Manistique’s Carter Miller, who each had two goals apiece. Munising’s Carter Deatsman, Newberry’s Cameron Skeans, and Manistique’s Carter Lavigne also scored in the win. Goaltender Alex Noble faced 21 of the 23 shots and gave up just one goal before stepping aside for a break as the team turned to backup goalie John Van Dyck.

With a much needed win under their belts, the Emeralds headed to the southern border of the state for a two-day showcase event. Lenawee United, a co-op of eight different schools in lower Michigan, and Jackson United, a co-op of public schools with a total of more than 4,000 students from Jackson County, hosted the event. The Emeralds and the Muskegon Reese Puffers were invited.

Manistique opened up the Thanksgiving Showcase, playing Lenawee United at Adrian College. It was the most complete performance of the young season for the Emeralds, who out skated and out hit an overwhelmed Lenawee team that couldn’t keep up. The Emeralds picked up an impressive 4-0 win.

Nutkins started the scoring with a powerplay goal, his third of the season. Newberry standout Connor Carlson made it 2-0 later, when he scored on a beautiful backhanded penalty shot. Matthew Rahilly and Stephen Allen drove home third-period daggers for the Emeralds. Deatsman, Miller, Allen, and Chazze Bultema tallied assists in the win, and Alex Noble made all 26 saves for his first shutout of the season.

Saturday’s weekend finale saw the team travel to Jackson for a showdown with Jackson United at Optimist Ice Arena. The Emeralds got off to another good start when Allen netted his second goal of the season to make it 1-0 early. The two teams traded goals all game long, and each time Jackson United tied it up, the Emeralds jumped back in front.

Miller was at it again, getting the next goal to put the team on top, and scoring again on shorthanded breakaway after the game got tied up 2-2. The third period was filled with penalties, and Jackson United tied it up on a 5-on-3 powerplay in the final minutes to force overtime. In the extra 8 minute period both teams had chances but couldn’t net the game winner, ending the evenly played matchup at 3-3.

The Emeralds now take some time off before beginning a busy December schedule. They are next in action Friday and Saturday December 9 and 10, when they face off with Grand Rapids Christian and Muskegon Mona Shores at the Sault Showcase in Sault Ste. Marie.