The French Trucking Bantams are headed back to the state championship tournament. Following a masterful weekend in Munising, the team claimed the District 8 Championship on February 9 and secured their place in the state tournament in March. 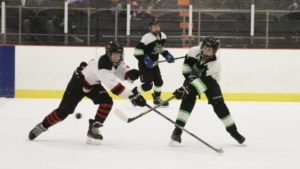 The 14-and-under squad won that tournament last year and are prepared to defend the title. The combined team of players from Newberry, Manistique, and Munising have been rolling all season long and for the five players who have come up through the TAYHA organization, it’s another year in a long line of big wins. Matthew Rahilly, Ethan Edwards, Ethan Pavey, and Kennedy Depew are now headed to their fifth consecutive state tournament, while Newberry’s Cameron Skeans will make his fourth trip to youth hockey’s biggest weekend.

“I don’t know if there has ever been another group to do what they have done. Everywhere I’ve been, in every rink and arena, I look at the banners and I haven’t come across another group from an organization that’s done it together as one group for five years in a row. It’s remarkable!” said Coach Ben Rahilly.

The MAHA 14U B State Championship will be played at Wings West in Kalamazoo the weekend of March 6-8.

While the road may seem familiar for some, many will be making their first trip to the state tournament. “We have eight or nine first timers,” stated Rahilly. “Being around those kids that have done it before was a big help. Just seeing how they act and how they handle themselves. It’s still hockey. It’s what we’ve done all season.” Rahilly went on to say that the win wasn’t taken for granted. “For those five or six that have done it before, they are still just as excited. They’ve earned everything they’ve gotten. They’ve worked hard. We don’t just show up and practice. We come to work. Everything we do before practice, and everything in practice, it’s for moments like this!”

French Trucking opened the weekend with an impressive showing, making a statement in game number one with a 10-1 win over Iron Range on Friday afternoon. Taking a 1-0 win into the weekend, the goal Saturday was to get the best possible seed for Sunday’s crossover round. Saturday morning brought a tough test, and an emotional challenge, as the team took on Escanaba, who now has longtime TAYHA player and former teammate Cooper Pigeon playing for them. Pigeon won multiple state titles with his former teammates in Newberry, but is now on the opposite side. French Trucking was too tough for Esky, winning 5-0 and clinching a spot in the semifinals. It was on to the afternoon where again they won, overmatching Marquette 7-1. With a 3-0 record in group play, French Trucking took the top seed in the American Division, and earned a spot in the second semifinal later Sunday morning.

With only the final four teams remaining, all eyes were on earning a trip to the championship game in Sunday morning’s semifinal showdowns. Escanaba, who earned the number two seed in the American Division, lost a heartbreaker to Ironwood. The Polar Bears would play on to the championship round. French Trucking thought they would have their toughest test of the tournament in their semifinal match up, as they drew Copper Country. The last time these two teams played, Copper Country upset French Trucking in the finals of the Marquette Holiday Tournament. With revenge on their minds, and another title shot on the line, there was no stopping the green and black attack. French Trucking flew out to an early lead and dominated, leading 6-0 at the end of the second period, and winning 9-4. French Trucking then left no doubt in the District 8 title game, shutting out Ironwood 6-0 to walk away winners of the tournament.

Despite the big stage and bright lights, nerves were calm before the contest.

“I told myself it was no big deal. Just another hockey game,” said Kennedy Depew. Cameron Skeans calmly taped his stick up in the balcony, a ritual before every game. Ethan Pavey strolled in, listening to his beats and bobbing his head. Matthew Rahilly snuck off to the car for a nap. Even if the kids were calm, the coaches were waiting with anticipation. I saw Ben Rahilly in the warming room about two hours before puck drop. “I was just bouncing off the walls…waiting to go. I was excited.”

Even though his son got a nap, I asked Coach Rahilly when he would sleep. “Never! I was up at 5 a.m. this morning wondering what do we gotta do in the first game, and if we win, what do we do against whoever we play in the next one. My mind is always racing.” One of the trickiest challenges has been bringing kids from three different towns together for one common goal. But the coach said all of the credit goes to the kids and the parents. “The parents in this group have made this group gel. They really have. The parents all get along. There has been zero drama. The kids came together on the first day of practice. No cliques or groups. Just one conglomeration. It’s been a ton of fun.”

For now five-time state qualifier Matthew Rahilly, it never gets old. “I’m excited to go back to states. Five years in a row is something special!”

His dad, and coach, summed it up best. “Kalamazoo – Here we come!”