Softball team coming out of quarantine

Only a few weeks remain until District Tournaments take place and graduation ceremonies get under way. While many are celebrating the end of a wild and crazy school year, especially when it comes to sports, the Newberry Lady Indians Softball team is just beginning—again. 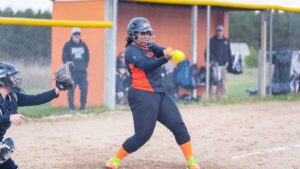 Spring sports quarantines have hit softball harder than any other sport. Quarantines have taken out multiple players and teams around the Eastern U.P. The schedule has been a mess. Throw in spring break, and the unpredictable spring weather, and playing games has been impossible.

The official season only has a handful of days left, yet the Lady Indians Softball team has only played twice. Both games were on the same day, a single doubleheader against the Pickford/Cedarville combined team. Everything else was wiped out.

Now, in the third week of May, the Lady Indians are fresh off quarantine and the season is starting all over again. It will be a wild sprint to finish an absolutely wild season.

“In the next three weeks, we hope to get in six games a week,” Dake said. “We have conference make up games and other games to work things out. We will continue to work for success this year, while also building for the future.”

For Dake and his players, the wait has been a tough one.

“The anticipation is, at times, overwhelming,” he said. “You can only do so much in practice to get ready for games, but nothing can replace game action. The focus for the rest of the season will be to improve each day.

Dake said his team has been making strides all season, inspired by seniors Jen Dzelak and Katie Rahilly.

They’ll also stay positive about the situation. “Our team has remained extremely upbeat this season,” he said. “We tend to focus on the positives and build on those. The fact that the players genuinely are excited to be around each other has been the best thing about this season, so far.”