Sammy Taylor is resetting the pace

In fifth grade, Sammy Taylor noticed she was a fast basketball player. That made her curious about running so she joined middle school track. She thought it would be “fun”. 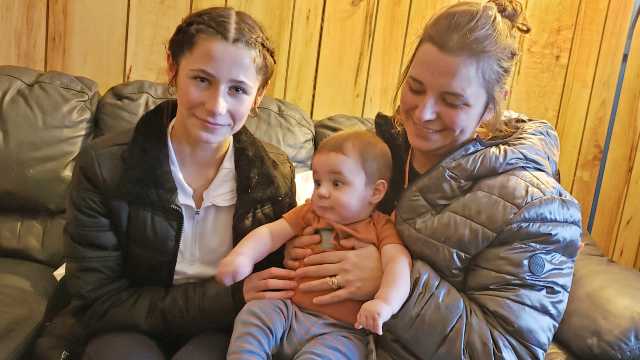 Fast forward a few years, and schools across the entire U.P. are noticing just how fast Taylor is. As a freshman, she was voted the best female runner in the U.P. in 2022. She won all but her very first cross country race, in which she took second. During her first season, she lopped about a minute off her time and put up results that beat many of her male peers.

This is all Sammy’s doing. She decided she would run faster, and faster, so she did.

At the front of the pack, when she’s half a minute in front of the next closest runner – teammate Kaylen Clark is often the only runner near Taylor’s pace – she doesn’t take her lead for granted. She keeps going because of the respectful fear of who’s behind her.

“I look ahead at what I want and will do anything to get it,” Taylor said. “That’s why I work so hard.”

The soft-spoken freshman, the middle child in a family with seven kids, is self-propelled.

“She’s amazing,” said Amber Taylor, her mother. “She’s always been driven and wouldn’t take anything from anyone. She knew what she wanted, and she got it, every time.”

Amber said she and her husband, Rob, are very proud of Sammy. Amber said Sammy is family oriented, and if she’s not running or playing basketball, she’s probably on the couch playing with her younger siblings.

“I think the awards she wins are wonderful, but her drive and her push is really something,” Amber said. “Really admirable.”

Sammy studied how to eat when preparing for a race. She eats a lot of pasta the day before a race, then switches to light meals and protein on race day. Food is fuel, not fun, in those moments.

“It is always exciting to coach players who are passionate about their sport,” said Sammy’s Cross Country Coach Lori Fair. “When they possess the drive and talent that Sammy does, it’s that much more exciting!”

One grade behind her, Sammy’s sister Abby is also a talented runner. Abby is expected to join Sammy and Clark on the cross country team next year. The three should make a powerful trio.

Fair said recruiting for more female cross country runners is a priority. Newberry would be eligible to win meets if they had at least five runners on the squad, and with three top finishers, the team would be very hard to beat.

“Kaylen and Sammy proved they are a duo to be reckoned with in competition,” Fair said. “Abby will definitely strengthen the team, but not everyone has to be a superstar to make an impact. We’ve won meets because of the 4th and 5th runners. The girls team will definitely have a triple threat next year!”

Sammy has personal goals, too. She wants to bring her race time under 19:30 and into the low 19s.

“I would like to go to college and run there, and keep running after that,” she said. “I just know that I want to keep running.”