Rahilly & French earn All UP honors

Newberry Senior Katie Rahilly and Engadine Sophomore Leah French have earned one of the U.P.’s top basketball honors. Both were named to the UPSSA All UP Basketball teams in voting that took place last week. Rahilly and French placed in the group’s All UP Division 4 2nd Team for the 2021 season. 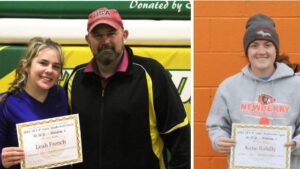 Rahilly was one of three senior leaders for the Lady Indians this season. She averaged 16.4 points per game and finished her career with 919 total points. She completed her final season with 4.7 rebounds per game, 3.5 steals, 1.8 assists, and 1 block per game. Rahilly was the EUP Defensive Player of the Year for the third consecutive season.

Described as a “dominant defensive player” by Coach Jim Dzelak, Rahilly was also praised for her offensive efforts. In his nomination letter, Dzelak said that Katie was the heartbeat for the Lady Indians offense running the point. She had four games over 20 points and a season high of 27 points this season, often while double-teamed. She played more than 30 minutes per night and impacted the game on both ends of the floor.

In Engadine, Leah French led all season long for the Lady Eagles. Finishing up her second varsity season, French averaged 15 points, 2.8 steals, and 2.5 assists per game.

The most impressive part of her season may have been the fact that the 5 foot 5 inch point guard averaged almost 9 rebounds per game even though she was often one of the shortest players on the court. Her toughness and desire to play defense, as well as her work ethic, were why Coach Roger French nominated her for the All UP Team.

The rest of the Eastern end of the U.P. was also well represented in the voting. Rudyard’s Chesney Molina and Pickford’s Kennedy Guild were both named to the Division 4 1st Team. Cedarville’s Elysia Causley, Pickford’s Lizzie Storey, and Munising’s Jenna Mattson joined French and Rahilly on the D4 2nd Team. Rudyard players Brooke Besteman and Tristan Smith, and Sadie McGuire of Brimley were on the Honorable Mention list. Coach Carlos Molina was voted Division 4 Coach of the Year.

In the large school voting for teams in Divisions 1-3, Clair Erickson of the Soo, and Hallie Marshall and Ally Schultz of St. Ignace were selected to the 1st Team and the Soo’s Lilly Alaspa and Jordyn Haller, and St Ignace’s Emmalee Hart were named to the 2nd Team. Dream Team Selections were Nicole Kamin (Escanaba), Elli Djerf (Calumet), Emma Anderson (Menominee), Elise Besonen (Ewen Trout Creek), and Alyssa Hill (Negaunee). Kamin and Besonen were the Players of the Year in their respective groups with Kamin taking home the Ms. UP Basketball Award as the top overall player.

Sault Ste. Marie, Calumet, and Carney Nadeau were voted as the Teams of the Year in their respective divisions.