Rahilly will attend Concordia University in Wisconsin to play hockey, while Depew will be suiting up for the Finlandia Men’s Basketball team next year. 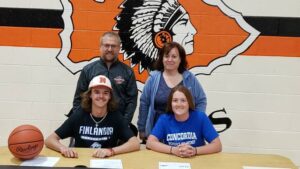 For Rahilly, the announcement came as an end to a tough process that had her have to first decide on what sport to play before she could select a school. In the end, she chose to follow a lifelong dream and stay on the ice.

“Playing college hockey has always been a dream of mine and it never faded,” Rahilly said. The multi-sport star had interest from other schools in softball and basketball as well but said the fit on and off the ice with Concordia made things a little bit easier to decide.

“I didn’t really want to play on the east coast and be that far away from home but I wanted to play hockey,” Rahilly explained. “So I’m lucky I found a place to play in the midwest. They have a very welcoming atmosphere and a really nice campus. They are small, and with class sizes you can get a lot of one-on-one time with professors so it’s nice.”

With her college decision now made, she’s feeling good, and says the sacrifices that she and her family have made to pursue the dream were well worth it.

Katie will join older brother Jeff in the college hockey ranks. He recently completed his season with Davenport University in Grand Rapids.

Logan Depew will leave Newberry as one of the most decorated players in program history. His next stop will be with Finlandia University in Hancock. The 2021 All EUP and SAC selection also earned Division 4 All UP honors and was named to the AP All State Team.

Now after a lifetime of games in the JL DeCook Gym, Depew will wind up right where he wanted to be…playing college basketball. “I knew I always wanted to keep playing basketball after high school. My papa (Jim Depew) played college basketball so I’ve just tried to follow in his footsteps.”

The Tom Villemure Award winner multiple times as Newberry Basketball’s MVP, Depew said a recent visit to Finlandia sealed the deal. “We toured the campus and it was small, felt like a good fit, and I could really learn and grow there. It’s going to be a nice experience getting to play basketball and I can get a good education there.”

Now that he knows the next step in his journey, he’s taking time to reflect on his time in the gym where he’s grown up and played since his early days in the NYBA. “I’m just going to miss this place,” he said. It’s home. There’s no other feeling like it. It will always be special.”

Depew and Rahilly may cross paths next spring when the Concordia Women’s Hockey team will visit and play a weekend series against Finlandia late in the regular season.