Newberry Softball traveled to Brimley on Wednesday, May 11 to take on the Bays. 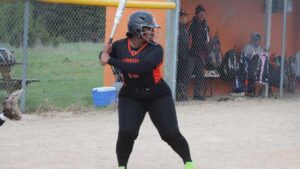 Game two was closely contested until the last out. Newberry scored four runs in the last inning, but came up one run short to close at 13-12.

Shanley and Alazayah walked 7, struck out 4, giving up 6 hits. Shanley had three hits, Priya Rao, Alazayah Depew, Kimbler, and James all collected a hit. Every batter reached base at least once during the contest.

The next night, Newberry hosted St. Ignace, losing game one 20-9. It was an 11-9 game in the fifth inning until the Saints put it away in the last two innings. Shanley and Alazayah had 18 walks while striking out 5. Trenidy Depew, Alazayah Depew, Kimbler, and Rao all had hits for the Indians.

Game two was stopped in the second inning due to lightning. Ellie Maki had a double and Lilly Heim had a single before the weather stoppage.

The Indians are dealing with some injuries, giving other players a chance at significantly more playing time. This gives them the opportunity to gain experience.