This week, we catch up with Newberry track and cross country star Natalie Beaulieu, who graduated from Newberry High School in 2016 and took her talents to Central Michigan University.

Very few Newberry runners were ever better than Natalie Beaulieu. Those who knew her best would describe her as the sweet, quiet, kid who was always on the move. She found a way to flip the switch, though, pushing with grit and determination to turn a casual hobby into a driving force. 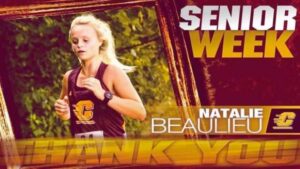 “It’s kind of funny, but I had no interest in running in middle school other than that it was something to do and it involved being with my friends,” she said.

Running got more fun just before she went to high school, becoming part of her daily routine. Her parents, Chris and Karen Beaulieu, taught her that she’d have to go “the extra mile” to do well, and to run for herself, with joy.

“Nobody else mattered because I wasn’t out to impress anyone,” she said. “Having my parents support me for what I loved to do was so important. They were my number one cheerleaders.”

The exercise also helped take her mind off of high school stresses, challenged her in new ways, and led to lifelong friendships.

“I loved the team bonding in track and cross country,” she said. “Cheering each other on and supporting each other was rewarding for me. Getting to know athletes from other schools and becoming friends with them was definitely a highlight.”

The records are nice, she admits, but she hopes her legacy is about more than that.

“I am proud of having records, but this just shows me that my hard work paid off,” she said. “I don’t care about the numbers. I care about what people think of me as an overall athlete and my work ethic.”

College recruiters noticed her work ethic, and she began getting letters from recruiters in her junior year of high school. During her senior year, she visited Central Michigan University, meeting the track coach and getting a feel for the campus.

“After my visit, I knew in my heart this was the school for me,” she said. “I would get to follow my passion of running at the collegiate level, I wasn’t too far from home, and I would get a quality education.”

It was an immediate challenge running at the Division 1 level in college. Unlike high school, where everyone gets to race, Natalie had to earn the chance to compete in races.

“Adjusting to competing at the D1 level was crazy,” Beaulieu said. “Running times in the U.P. seldom come close to what athletes downstate run, or in other places for that matter.”

There was a comfortable shift in no longer being a school’s star runner.

“I kind of liked not being the center of attention when it came to college sports because there was less pressure,” she said. “I loved to run, compete, and continually try to improve myself. Knowing that I was able to do these things is a dream come true.”

Beaulieu did crack the rotation, earning her way into races, and traveling the country to compete.

“I went to Raleigh, North Carolina and Charlottesville, Virginia,” she said. “I liked going to these places because it was beautiful and different running in warmer weather. We competed against colleges from all over the United States, also. Raleigh was also one of my best races.”

Watching other racers at the D1 level inspired her, she said.

At the start of her senior year at Central, the bottom fell out. Beaulieu was diagnosed with mono, then contracted MRSA.

“This kept me away from training with my teammates, and my morale started to crumble,” she said. “Influenza followed. Missing my cross country season and my indoor track season was horrible.”

When she was finally healthy enough to train and compete, it looked like she was about to have her best spring outdoor track season ever. Then COVID hit, and it was over.

“I didn’t have closure with my team. I finished my semester of schooling online, and we didn’t have a graduation,” Beaulieu said. “This was a very difficult year for me.”

Technically, Beaulieu could have reclaimed the year she missed. The NCAA granted a waiver for all senior athletes, giving them another year of eligibility. But Beaulieu studied her options and moved on.

“I was ready to continue my career as a Physician Assistant,” she said. “I was accepted at different schools but chose the GVSU PA program in Traverse City because it was a good fit for me. I knew I would continue running on my own and compete in road races, so I didn’t feel the need to prolong my life at CMU based on running at the collegiate level.”

Beaulieu advises any college student-athletes to keep doing their best, and be ready to accept change and uncertainty. Finding a balance between training and academics is hard, she said.

“ It gets quite overwhelming at times,” Beaulieu said. “I didn’t expect any of this, but I dealt with it and it made me a stronger person.”

The girl that used to run more miles a day than most people drove hopes others will also find their passions.

“Go for it! You aren’t going to know if you will like it until you try it,” she said. “I remember the first mile I ever ran, and it was with my dad. I almost died, but I kept at it. Make goals for yourself, whether it be academically, personally, or with a sport you love. I made goals for myself, and it helped challenge me to become the best version of Natalie.”