The Newberry boys and girls teams traveled to Lake Superior State University for a season opening track invitational at the LSSU Norris Center. While the Norris Center gives teams a chance to compete while they wait for the snow to melt, it also provides interesting issues.

The indoor track is a 200 meter, near-circle surface half the size of the 400M oval that athletes are used to running on. Distance runners are uniquely challenged, as the increased number of laps can often mess with their pace. Because the straightaways are so short, many sprint races and hurdle events are shortened, and because of the layout of the building, there are no pole vault or long jump events due to safety concerns. 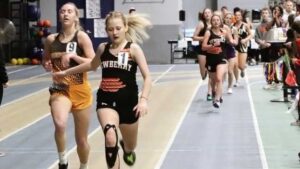 The facility also remains open to LSSU students who are working out and using other facilities such as the rock wall or tennis courts, and the two groups can get in each other’s way. While the girls were running their 4×800 relay, tennis balls came flying onto the track multiple times. Coaches are also faced with a limited amount of entries per event, and must submit their lists ahead of time. That which takes away the chance for in-meet adjustments to maximize scores or accommodate for injuries in other events.

The indoor meet is also the first time teams get to see what their line-up looks like and how it measures up.

The Newberry teams overcame all of those obstacles. Both the boys and girls teams had a strong showing in their first action of the season. A potentially deep boys team with strong numbers finished in second place with 94 points, trailing only meet champion Pickford, who is traditionally a Division 3 powerhouse. Due to Newberry’s enrollment, they are a Division 2 school in track, the middle level for U.P. schools.

The boys were led by Coleton Labadie, who took first in the 55M sprint, and Eric Edwards, who threw 41 feet in the shot put to win that event. Claudio Bistolfi had a pair of second-place finishes in the mile (5:27) and 2 mile (11:48), and freshman Matthew Rahilly finished second in the high jump with a final height of 5 feet, 8 inches. Labadie also finished third in the Boys 400 while iIam Nalette took fourth in high jump. The boys relay teams took fourth (4x400M) and fifth (4x800M).

The Lady Indians may have had the most impressive showing of any team on the track. Despite having just six runners on this year’s team, and losing Head Coach Cori Canfield to maternity leave, the girls surprised many with a third place overall finish.

Every runner contributed to points, and most took on a full event load to help the team maximize on the few runners they had. Kaylen Clark continued to dominate distance events, winning the mile (6:12) and 2 mile (13:46). Clark also anchored the 4x800M relay team that also finished first. Other runners in the winning relay were Addison Schroeder, Caitlyn Canfield, and Jorja Suriano.

Suriano and Canfield were second and fourth, respectively, in the 800M, and Canfield also finished fourth in the 2 Mile.

The Lady Indians finished with 76 team points, coming in behind Pickford and St. Ignace.