By John Vrancic
For the Newberry News

What a difference a week makes.

“I felt a lot better than I did last week,” she said. “I think I’m back to 100 percent. I also found out I have asthma. It took a lot of time for me to figure out when to use the inhaler, although I still have a little time to get ready for the (Division 2) regional. I like the (rubberized) surface here. It’s definitely easier on the legs than the hard (asphalt) surfaces.” 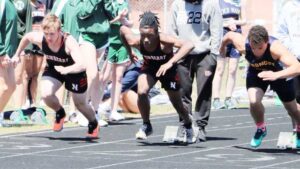 Mohar was also in the 400 relay with junior A’Keem Jackson and freshman Connor Carlson.

The Indians were scheduled to compete in Tuesday’s Engadine Invitational. They resume in Friday’s Munising Lions Invitational under the lights at 6:30 p.m., prior to hosting their own invitational May 17.