The Newberry Track and Field teams took the big step towards qualifying for the UP Finals at their MHSAA Division 2 Regional meet in Gwinn last Friday. Athletes waited until the last possible minute for storms to clear, then gave their all-out effort to reach the ultimate stage in UP Track and Field. 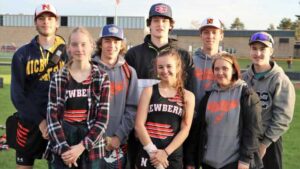 The Newberry Boys finished in a tie for third place in the team scoring, trailing only Division 2 powerhouse Ishpeming and conference rival St. Ignace. Fourteen Newberry boys earned an invitation to UP Finals across 15 total events. The Indians were led by senior Eric Edwards, who won the Regional Championship in the Shot Put with a throw of 42 feet, 6.25 inches.

Edwards has emerged as one of the strongest throwers in the Upper Peninsula, but he has also shown improvement on the track. Edwards qualified as a member of two relay race teams. The Indians 4×200 team, which also includes Matthew Rahilly, Kennedy Depew, and Coleton Labadie, took home a Regional title of their own, finishing in a time of 1:38.34.

It was one of the first times that combo came together this season, and Coach Drew Schultz couldn’t wait to see them succeed.

“I’ve been waiting for the combination to come together,” he said. “I knew if we could get them together at the same time on the same day, they would get the job done.”

Edwards, Rahilly, and Labadie teamed up with sophomore Jacob Mohar to qualify in the 4×100 relay as well.

Many of the relay team members also had success in individual events. Labadie earned a third place finish in the 100M dash and earned two more spots in relays, giving him a team high of four events at finals.

Mohar will head to UP Finals in three events, after finishing third in the pole vault and fourth in the 110M hurdles.

Claudio Bistolfi was successful in both distance races, finishing 3rd in the 3200M run and 4th in the 1600M. Bistolfi was also a part of the 4×800 relay that earned 4th along with Jacob Brown, Connor Carlson, and Travis O’Neil.

Coach Schultz said he was proud of the team’s effort and improvement. “People don’t realize, we’re young. We’re inexperienced,” he said, “Some of our sophomores haven’t seen competition since 7th grade. So to see our young guys compete and qualify as many as we did yesterday and finish 3rd overall in a competitive Division 2 regional makes me very proud and very excited for our future.”

The Newberry ladies have been battling against much larger teams all season and with a much smaller roster. With only six runners going against top competition, the Lady Indians finished in 6th with just 5 total points. Distance star Kaylen Clark is headed back to the U.P. Finals after qualifying in both the 1600M (3rd – 5:58.4) and 3200M (2nd – 13:32.55). She will be the lone Lady Indian making the trip to Kingsford.

The U.P. Finals are scheduled for Saturday June 4th.