In a football season that has seen a lot of change, one thing remains the same: Mustang Stadium in Munising continues to be a house of pain for Newberry football. 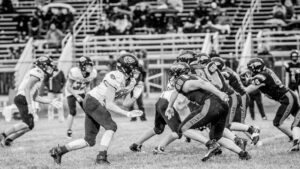 Munising’s home field advantage paid off again as Newberry got defeated in an always-intense rivalry matchup.

For whatever reason, even some of the best teams in Indians football history have had trouble at Mustang Stadium. Carved into the side of a mountain, visiting teams are surrounded as soon as they arrive. Saturday night’s showdown summed up like many before: A nice fall night, beautiful colors, a big crowd, and a thorough defeat. Munising beat the Newberry varsity team with a score of 40-0.

Adding to the disappointment, the Indians had to watch the Mustangs sprint across the field one last time to take home the giant axe that symbolizes the rivalry.

The first quarter was a low-scoring affair, with both teams possessing the ball only one time, but the Mustangs took the lead on a short touchdown run. The TD capped an opening drive that lasted 16 plays and picked up nearly 80 yards. A fumble deep in Munising territory concluded the Indians’ sole possession in the first quarter.

Munising continued to control the pace, using a great stable of running backs to keep the ball, and the clock, moving. The Mustangs mixed in mis-direction and trickery with quarterback Kane Nebel also getting in on the action as soon as the Indians turned their attention to the running game. Despite the early struggles, the Indians were still in the ball game before a dramatic end to the first half. The Mustangs got the ball back with a little time remaining in the second quarter and leading 12-0. They marched right down the field, using a huge pass play to set up a third touchdown with no time left on the clock. A close contest had been broken wide open on a drive that went over 90 yards in less than two minutes.

At halftime, Munising honored their 1980 State Title team, which ironically defeated Newberry on the exact same night 40 years prior. But it was the current-day Mustangs that looked like champions, coming out in the third quarter and leaving no doubt in the first ever eight-man game between the two schools. Three more scores made it 40-0 in a game that finished in a downpour under a running clock.

The JV team struggled similarly. Shorthanded again with only 10 players available, the junior varsity Indians fought hard but faded late in a 32-6 loss. Running back Jordan Carey made an incredible catch late in the contest to come up with the first JV touchdown of the season on a pass from Gavin Nutkins.

Newberry and Munising were supposed to meet in a JV rematch Wednesday night, but the game was cancelled due to the short turnaround and low numbers. The JV players will play up with the varsity when they travel to Felch for a week three game against the North Dickinson Nordics. That game will be played Thursday night at 7 p.m.