A tough draw provided an even tougher matchup for the Newberry Indians in the second round of the MHSAA eight-man Division 1 State Playoffs. One week after upsetting Onaway, the Indians had the nearly impossible task of taking on the defending State Champion Pickford Panthers Saturday afternoon.

Though many assumed Newberry had little chance to win, the team prepared for anything to give it their best shot. Despite the Indians’ best effort and energy, Pickford had a 63-7 statement win. 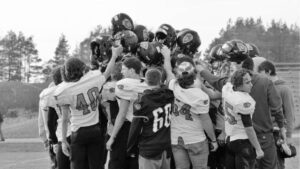 Outsized and overpowered by the bigger and stronger Panthers, Newberry fell into an early hole and had to watch as the Panthers played nearly perfect football. The Panthers started with the ball and quickly went right down the field and scored the game’s opening touchdown and two point conversion to make it 8-0. Newbery got a glimpse of how horrible the day would become at the end of their first drive. Forced to punt after a three and out, the long snap was missed as Coleton Labadie was forced to scramble and pick up a rolling ball and was buried by Pickford’s defense. The short field turned into another quick touchdown and a two score 16-0 lead for the defending champs.

It would be 24-0 before the end of the first quarter as the Indians were limited in every phase of the game. The offense, trying to grind out yards and take time off the clock, was bottled up from the beginning. Running backs Ivan Oswald, Marco Juarez, Labadie, and Zach Burton all got carries but combined couldn’t crack the 100-yard mark.

The passing game wouldn’t provide much relief. Under enormous pressure from the Pickford front line, QB Connor Rintamaki couldn’t think about making a play, let alone try. The Indians had another interception returned for a touchdown against them, and after getting pinned back at the end of a kickoff, suffered a safety as they were sacked in the endzone. The combination of turnovers, short drives, poor field positioning, and the performance of the Panthers were all too much to overcome in a game that was 54-0 at the half and finished up 63-7.

“There were other things we could have done or tried, but I’m not sure it would’ve mattered much,” said Assistant Coach Zach Clickner. “We had to play perfect today, and we didn’t. Give Pickford credit. That’s why they are the best. They were the ones who played perfect and we just couldn’t get anything going to give us a shot.”

Clickner was still pleased with the season overall, and was already looking forward to next year on the ride home from Pickford.

“We’ve got a lot of great guys coming back. The guys we are losing will be huge holes to fill,” he said. “But we have the guys that should be able to step up. But the key is that we can’t just show up and think that. We have to go to work. We need a real true offseason program and we have to put in the work. That’s the only way we are going to catch up to some of these teams.”

The Indians finished 4-4 overall on the season, after going 3-3 in the regular season, and 1-1 in the postseason.

The team split their two rivalry games, beating Engadine in their first Little Brown Jug matchup to end the regular season and secure a playoff spot. They won three straight games prior to playing Pickford. Their only other losses were to Munising in the Battle for the Axe, and at home to fellow playoff opponents Forest Park and Rapid River.

Several players saw key playing time, especially in the second half of the season when the JV season was shut down and the two teams combined.

While they will have to rebuild their offensive and defensive lines, there is serious promise at the skill positions. Junior starting Quarterback Connor Rintamaki will lead a core that includes three of the team’s top four rushers in Juarez, Labadie, and Burton. Also staying is their top TD pass catcher Eric Edwards, and Liam Shanley, who not only took snaps at quarterback, but played four different spots on offense and started games at two different positions on defense. They also hope to have LB and RB Johnny Nutkins back after he missed the second half of the season with a back injury. A solid group of sophomores who got an early start to their varsity careers will round out the roster. After another successful middle school season, the JV should have a solid foundation in place as well after seeing their last two seasons cut short.

One major question will remain…Will hall of fame head coach Joe Austin return for a fourth season on the sidelines?