Chalk up two more big wins for the Newberry boys varsity basketball team. The Indians defeated the Cedarville DeTour Islanders last week, then came home for a rivalry showdown against the Engadine Eagles on Monday night. There they picked up their second conference victory in the last week to bounce back after a string of recent tough games against elite competition. 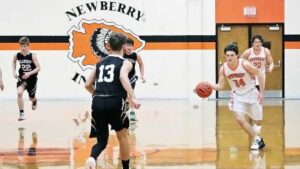 The Indians used an awful season opening loss to the Islanders as fuel for redemption in the rematch at home last week. In that first game, the Indians couldn’t take care of the basketball, committing a ton of turnovers that led to extra easy opportunities for the opponent. When they did manage to hang on, they couldn’t find a way to score.

Since then, the Indians have gone to work, getting better every day and hanging their hopes on strength and determination to overwhelm opponents. With the rematch taking place at home, and the team in a much better spot, players and coaches both went out to show that the first loss was just a fluke.

In an impressive showing, the Indians did what they do best – go to work. Freshman Matthew Rahilly continued his breakout stretch, seniors Liam Shanley and Eric Edwards stayed out of foul trouble long enough to control the paint, and the Indians guard play controlled the pace. The tribe didn’t let the Islanders run their fast break or hit open threes, and executed a great game plan on offense in the 62-54 EUP Conference win.

After that, all eyes were on the first meeting of the season between the Indians and Eagles on Monday night.

Newberry came in feeling confident, and many thought they would automatically out-match Engadine. But as is normally the case in games like these, energy, emotion, and intensity can often mean more than skill or talent. Engadine was fired up and looking for their first win of the season. The team was also without Head Coach Joe Brownson, who missed the game due to Covid protocols.

Despite the deck being stacked against them, Engadine slowed the pace and played a physical game, sinking throws from the free throw line time and time again in the first half. Not only did that mean easy points in a game between two teams that struggle to score, but it put the Indians in early foul trouble, limiting how they could take advantage of the game’s matchups.

The Indians are used to being the hardest working team on the floor, but the Eagles were having none of it and took an 11-8 first quarter lead and turned it into a halftime advantage of their own.

Coach Kenn Depew gave a fiery halftime speech that sparked the Indians to a strong second half, where they were able to force turnovers, get out, and run the fast break. The Indians eventually wore down an Eagles team that isn’t very deep, with a bench made up of mostly part time players filling in from the JV team.

Newberry’s Claudio Bistolfi was fantastic again and Rahilly had a huge second half, going toe-to-toe with Engadine’s top option, Matthias Miller. Junior Marco Juarez played his best game of the season, and senior Connor Rintamkai, in his final home game against the Eagles, scored two quick baskets and stole two straight inbound passes in a one-man show that made a huge difference down the stretch.

The game wasn’t pretty, even becoming ugly at times. But the two rivals played each other tight in a competitive contest that the Indians ultimately won 63-51.

The two teams will face off in the final game of the regular season on March 3 in Engadine. As an added bonus, the Newberry JV picked up their second win of the season, winning the JV game 35-21.