There were only 3.9 seconds left in what felt like a season that’s lasted forever. A season that’s been a rough ride for the Newberry boys, and one that for some will be the end of their careers. Facing the end of it, Coach Kenn Depew did what he has all season long. He wouldn’t let them quit.

This wasn’t your typical run-of-the-mill game for the Indians, who went 1-19 in the regular season. This was tournament time, where records are reset and anything can happen – and it almost did! 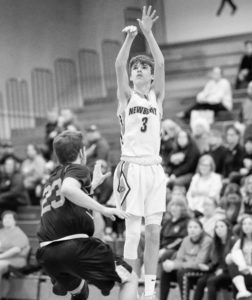 The Rudyard Bulldogs came to town last Wednesday night for a Division IV district semi-final and almost got upset, sneaking out of Newberry with a 54-53 win. Both teams battled back and forth for much of the contest. The fourth quarter saw several lead changes and was tied in the final seconds. Some calls were questioned both ways and when the dust settled, the stage was set for a heart stopping last few seconds. Tied at 50, Newberry missed a couple of great looks inside that could have put them up for good. But Rudyard kept fighting, eventually taking a lead in the late stages of the contest. All-Conference player EJ Suggitt hit a pair of free throws to give the Bulldogs a four-point lead with 3.9 to go. Many knew that was the dagger in a difficult season for the Indians. But Coach Depew called a timeout, rallied the troops, and sent them back out. Newberry would bury a triple off the inbound, but didn’t have enough time to get the ball back and fell in their best played ball game of the season, 54-53.

For Newberry Seniors Tristan Skidmore, Luke Jordan, and Jared Wallace, this was their final time playing in the JL DeCook Gymnasium. All have been praised by Coach Kenn Depew throughout the season. The coach has told me at times how much he loves Wallace’s defense and how he hustles and always works hard. Skidmore was one of the Indians’ most improved players this year. Put in tough spots because he was one of the tallest players on a very small team, he often went toe to toe with some of the biggest and baddest kids in the conference. He also extended his range, becoming an offensive option that could take pressure off others to score. Luke Jordan was a go-to guy for Depew. He was the team’s top true shooter, and one of the best pure jump shooters in the league.

The Indians will bring back a solid core for next year- late season JV call-ups Liam Shanley and Sam Sevarns have already made an impact. Better years may be on the way for the Newberry boy’s basketball program.