The Newberry Boys Basketball team continued it’s recent winning ways in an EUP Conference win over the Brimley Bays last Tuesday Night. Foreign exchange student Claudio Bistolfi had a breakout game, scoring 30 points to lead the Indians to their third straight win and a 73-37 EUP Conference victory over the Bays. 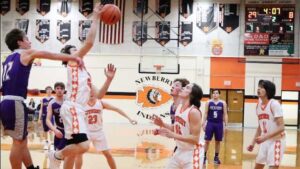 Bistolfi was brilliant in all aspects of the game. He got to the rim for easy layups, showed his speed and athleticism by getting open looks all over the floor, shot lights-out from deep and made the most of his free throw opportunities. Bistolfi’s 30 points were the most by a Newberry player in a game this season.

“We were able to run all night in this game,” Bistolfi said after his big performance. “We knew they were missing some players and had a lot of subs so we just kept trying to run. In the end they were struggling to get back and guard us.”

Bistolfi was also quick to credit his teammates for their contributions. “We played great defense tonight,” he said. “A lot of guys had great passes. We moved the ball and it was a good win for us.”

Coach Kenn Depew was impressed with the performance. “Claudio was just spectacular,” Depew said. “He uses his angles so well. He can leap, he can protect the ball on shots, he can go get rebound baskets, drive baskets, layup baskets, and score on the fast break. It was really great.”

When Bistolfi wasn’t blowing the roof off the J.L DeCook Gymnasium, the rest of the Indians stepped up in his place. Freshman Matthew Rahilly earned another start and continues to contribute consistently, big men Eric Edwards and Liam Shanley controlled the paint on a night where the Indians were without another post player in Kamen Honeysette. The guard rotation of Bistolfi, Connor Rintamaki, Marco Juarez, and Jalen Taylor controlled the pace all night long. “Games like this don’t come around too often, ” Depew said after the win. “Brimley was short-handed but we came out and really put it all together. It’s always a lot more fun around here after a win. We played really well.”

The Engadine Lady Eagles also came up with a conference win after a long trip to DeTour and a rematch with the Lady Islanders. Roger French’s squad shut down Islanders star guard Taylor Williams, holding her to just 12 points. Williams, considered by many to be a top-five player in the league, has now had two of her lowest scoring games of the season come against Engadine, who held her to just seven points in the first matchup earlier this season.

The Lady Eagles have an established start of their own in Leah French, who scored 19 points and had 12 rebounds in the win. But it was an emerging presence for the Lady Eagles who made the difference once again. Tessa Paquin had 24 points and 21 rebounds, her third 20-20 game of the season.

Coach Roger French says that Paquin’s strong play inside is changing the way teams line up and play against the Lady Eagles. “Tessa was huge for us,” French said. “When you have a player that can do what she does inside, and the way she rebounds, teams are starting to attack that. They are putting extra bodies on her to box her out and she’s getting more attention, which is allowing us to open things up and spread it out for other players.”