The Newberry Indians varsity football team is off to a perfect start to the 2021 season after crushing the Brimley Bays on Friday, August 27.

The Indians forced a shut out that night, with a final score of 36-0. The offense was sharp, scoring every time they touched the ball in the first half, and the defense was a brick wall. 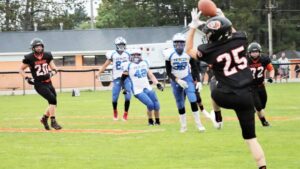 Quarterback Connor Rintamaki, a senior, was perfect, completing every single pass he threw, including a pair of touchdowns to Eric Edwards. When he wasn’t picking apart the Brimley defense through the air, Rintamaki was able to run all over, scoring a rushing touchdown on the ground.

Rintamaki showed the poise and composure of a third-year varsity starter and was excited to lead an offense that featured so many options.

“I felt like a kid in a candy store,” he said. “I know I can throw the ball to anyone and they will make a play on it.”

Rintamkai credited the hard work and preparation in practice for the offensive success. “It’s been intense. We’ve been working hard and trying to keep it going since the summer. It’s nice to come out and see that hard work pay off.”

The big win was made possible by assistance from the entire squad.

Head Coach Joe Austin and Defensive Coordinator Rudy Mendoza have been preaching the importance of having an intense and aggressive attack, and they didn’t let up on Friday night. Leading the defensive attack was team captain Liam Shanley, a senior.

“Our goal was to just fly to the football,” he said. “And when we found it, we were just there. It was a really good night for the defense.”

Shanley had multiple tackles in the backfield and a quarterback sack.

Freshman Matthew Rahilly had a smashing debut as a varsity player, intercepting a pass and returning it 44 yards for a touchdown. Marco Juarez also picked off a pass and ran it back to score.

The team is now focused on their next contest, when they face Bessemer in an away game.

“We have a short week next week and a long trip to Bessemer on Thursday. Bessemer is new to the 8 Man game after breaking up their previous 11 Man co-op with Ironwood and Wakefield. The game will be a varsity only contest, with kickoff set for 7 p.m. eastern.

The Newberry JV team also kicked off its season against Brimley on Friday, falling to the Bays 26-0. The Newberry squad scored first, but had the touchdown called back and later had several drives inside the opponents 20 yard line stall out because of penalties.

The JV will be off this week before heading to Gaylord St Mary’s next Thursday in a week three contest.