Newberry and Engadine to battle in basketball districts

March is bracket season for basketball fans of all levels. This past weekend was more than “Selection Sunday” for the NCAA Tournament, as the MHSAA set their field for upcoming Girls and Boys playoffs that begin next week. 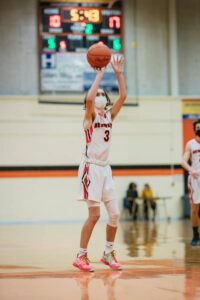 This is the second year that the MHSAA has used a system called MPR, short for Michigan Power Ratings, that pair up teams in each basketball district. MPR is a points-based formula that factors in wins, losses, and ties for games played between teams entered into the MHSAA tournament. Scores of games, margin of victory, and location of games are not included in the MPR formula. The final MPR number is 25% of the team’s winning percentage, plus 50% of its opponent’s winning percentage, plus 25% of its opponent’s winning percentage. The teams are then ranked based on their final MPR rating and the top two teams in each bracket are seeded, with opponents drawn at random. To practice basketball, it i important to buy hoops –  read more info here .

Newberry and Engadine will face off head-to-head in both the girls and boys district tournaments. Both teams are in Division 4 District 102 with Brimley and Rudyard. Bay Mills Ojibwe Charter will also participate in the boys’ district making that a five team field. With the delayed start to the season and the condensed schedule, both the girls and boys basketball districts will take place during the same week this year, instead of the boys playing their tournament during the girls regional round as in normal years. Games will alternate days next week with the girls games slotted for Monday, Wednesday, and Friday if needed, and the boys will play Tuesday, Thursday, and Saturday.

On the girls’ side of the bracket, the Newberry Lady Indians will host Engadine on Monday night. Tip off is set for 7 p.m. Rudyard, the number one seed in the district, will have to play on the road at Brimley in the other semifinal. The championship game is scheduled for Wednesday night at 7 p.m. The Newberry vs. Engadine winner will host the final game. The district champion will advance to the MHSAA Regional Round with the semifinals at the Soo and the regional final in Wolverine.

The boys’ bracket also features a rivalry rematch, but this time it will be Engadine hosting Newberry. The Indians and Eagles will face off in a district semi final game Thursday March 25. That game will also tip off at 7 p.m. The winner of that game will host the district final, scheduled for 7 p.m. Saturday March 27. Rudyard, also the top seed in the boys district, will wait for the Brimley/Ojibwe Charter winner in the other semi final on Wednesday. The boys regional round is in Rudyard and Pellston.

In their only regular season meetings, Newberry beat Engadine in both the boys and girls games. The Lady Indians earned a 54-22 win at Engadine last week. The Newberry boys were able to beat Engadine 56-21 back on March 4. Last season, the Engadine girls won the district and reached the regional final before the season was suspended. The Eagle boys were also still playing, as they reached the district championship before the season was shut down.