The 2021 high school football season officially starts Friday night and both the Newberry Indians and Engadine Eagles have home games.

Newberry has JV and varsity doubleheader against Brimley at home Friday. The JV contest will starts at 4:40 p.m., and varsity takes the field at 7 p.m.

Hall of Fame Coach Joe Austin and his varsity Indians are coming off of one of the toughest training camps in recent memory for NHS football. 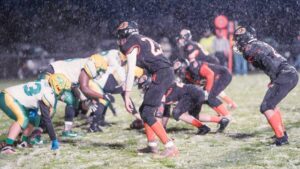 “We want practices to be tough,” he said. “We want guys to show up and put in the work. That way we are ready to go when games roll around.”

Austin said more than 30 kids prepped in the summer program, and he’s excited that it’s go time. His message at Monday’s practice exemplifies his plans. “Let’s win the day, fellas!” he told them. “We should want one thing and that is to get better every day. That’s the only way we get where we want to be. Let’s go get it done!”

This year’s Indians varsity squad has a deep and talented pool of position players who have a variety of skills and experience. Offensive Coordinator Zach Clickner knows he has plenty of guys that he can give the ball to.

“Our skill guys and our athletes are as good or better than anybody,” he said. “We can mix up personnel, we can run different sets, we can move a lot of guys around.”

With this much skill, he says there’s a new challenge: How to get everyone involved. “I’ll take our group of guys over just about anybody,” he said. “We have a ton of talent.”

There are higher expectations this year. After finishing last season with a winning record and reaching the second round of the playoffs, the coaches and players are all ready to take the next step.

“We are creating a culture here”, Austin said. “We want the week to be tough so on game day, we can go out and have fun and win games.”

The Indians tuned up for the season opener last week when they went to Indian River for a scrimmage that saw them line up and test themselves against other teams from around the UP and northern lower Michigan. The Indians had an impressive showing on a day that saw temps hit the mid 90’s. After a long, physical, gruelling day, The Indians were able to lean on that toughness and dedication that have been staples of their practices to come out as the strongest team at the event.

One team that they shared the field with at last week’s scrimmage was the Engadine Eagles. It was a chance for second-year coach Vince Leveille to see his team in a game style format.

After going winless last year, the coach can already see the improvement from his players as they prepare for the 2021 season.

“I think we showed some promise,” Leveille said. “I really liked the way we tackled.”

Work won’t stop for the green and gold, who are preparing to host Ironwood on Friday night. Engadine, which cannot field a JV team so far this season, has been forced to throw younger players into the fire of varsity football for the second straight season.

Leveille has focused on the basics. “Our keys this week are playing sound defense and tackling well,” he said. “Turnovers will also be huge. We have to take care of the ball.”