The two local girls basketball programs tipped off their seasons last week with a slightly different look and very different results. Both squads started the new season by combining their JV and Varsity rosters due to low numbers and tested their new rosters in early season competition. 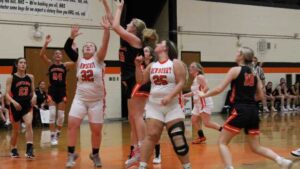 Newberry Coach Jim Dzelak was faced with the challenge of only having five varsity-aged players. Though the MHSAA allows juniors to play down on the JV, Newberry decided to call up their youngsters to take on the tough task of playing varsity basketball. This is Newberry’s second straight year without a JV squad. and last year younger players stepped up and gained valuable experience.

One senior, four juniors, and a handful of freshmen and sophomores took to the court in the season opener last week against Munising. Fellow sophomore Amelia Shanley is currently injured and expected to rejoin the team when she is able.

Allie Whalen, Trenidy Depew, Alezayah Depew, Gracie Taylor, Alanah Saldana, and the lone senior, Jaiden Egert, played varsity basketball in the past, and they gave Munising their best shot in the season opener.

The Lady Indians may lack age and experience, but they don’t lack effort. They fought tough defensively and limited Munising to just seven first-quarter points and kept things close for the first half before falling to the Mustangs 57-11. Despite the lopsided loss, Coach Dzelak pointed out how hard his players performed on a nerve-wracking opening night. He also said that player and team development would be the focus early on with the goal to get better every day.

If that’s the case, then the Lady Indians have already succeeded. With a game under their belts, the Lady Indians went to Kinross to take on Maplewood Baptist and showed improvement from their first time out.

Don’t let Maplewood’s school size or status in a non-MHSAA affiliated league fool you. They are a legitimate team, with a hidden gem in All UP player Chloe May, who scored 30 points to hand Newberry their second straight loss.

The Maplewood Lady Black Bears could contend for a district title this season, and may not lose a game. Despite the loss, the Lady Indians battled Maplewood even in the second half, even cutting into their lead and making multiple runs in the contest. They committed just 14 turnovers, one of their lowest totals since the start of last season.

Freshman Samantha Taylor led the Lady Indians in rebounds with 11 despite being one of the smallest players on the floor. Another freshman, Ashley Dzelak, was among the team leaders in assists. Dzelak made her first career start and made it a point to find her teammates on the offensive end.

Whalen caught fire, scoring a team high 18 points. Sierra Mallion played perhaps her best game yet as a Lady Indian, even locking down May for a stretch in the second half. Trenidy Depew buried multiple threes and gave the team a spark.

They may be 0-2, but the Lady Indians are already on the rise. They were shorthanded missing multiple players including Sophia Johnson, a starter from last year, and Amelia Shanley, who was the Chris Nance MVP Award winner last season as a freshman.

Down in Engadine, things are off to a better start but it certainly hasn’t been easy.

Defensive stopper Lauren King decided not to play her senior season, leaving All Conference and All UP Senior Leah French to shoulder the load for the Lady Eagles. After a rough start to the season opener against Rapid River, French settled in and found her groove, scoring 29 points, sinking five three-pointers. She also added 12 steals, 8 rebounds and 8 assists.

That performance caught Superior Central’s attention, and the Lady Cougars came in for Engadine’s second game looking to lock French down. They were successful slowing her down, and key contributions from Hali Butkovich and an impressive showing on the boards by freshman newcomer Jaden Sistrunk helped the team survive a second half comeback to defeat the Superior Central Cougars 34-30.

French had another  big game against the same Munising team that took down Newberry. The Lady Eagles put their perfect start on the line Monday night against Munising and found themselves down by double digits. French was triple-teamed, and while Butkovich and Bryce Zdebski chipped in some help, French had to be the hero again. She scored eight points in less than two minutes before halftime, and Munising only led 16-13.

The Lady Mustangs built up their lead before French fired back in the 3rd and the 4th. In the end, her 26 points wasn’t enough, and Munising escaped with a 39-33 win to give Engadine their first loss of the season.