Shooting clays seems like it only takes a single second. From the pull, to locking in on the target, to firing the shot, it happens so fast. It seems like nerves would be at an all time high. 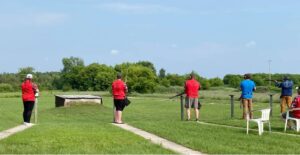 But for a local group of youngsters known as the “Clay Crushers”, it comes almost naturally. Time slows down, the focus goes up, and the excitement is undeniable. And what started as a group activity behind the Tahquamenon Sportsmen’s Club in Newberry is now taking center stage at state tournaments.

The Clay Crushers trap shooting team is the vision of two local men who have volunteered their time and knowledge to teach kids a new craft, get them involved in the outdoors, and promote safety for a new generation as they learn how to handle a gun. Art Green and Kyle Edwards coach the Clay Crushers, a group of local area youth ranging from rookies in the fifth grade to the most experienced high school sharpshooters.

“Our number one goal is to teach safety,” says Green.

The Clay Crushers include 12 kids from around the area. They typically practice on Sundays at the TSC Shooting Range on E. Victory Way and compete in area events during an eight or nine week season that includes a “Fun Shoot” with the group from Manistique and a mid-season conference match. 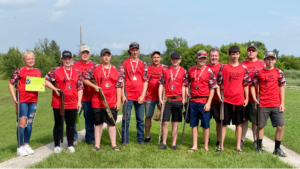 The culmination is the State Championship Trap Shoot, which was held this year in Mason on June 26. Eight local members of the Clay Crushers competed. The team finished runner up with in the team competition. They were led by Sophia Johnson, who earned All State honors with a score of 183 out of 200. Team members also included Gracie Johnson, Spencer Neeb, Ethan Edwards, Dakota Taylor, Hunter Cameron, Evan Lustila, and JP Maudrie.

“A team of this size really works well,” Edwards said. “It is almost the perfect amount. Our membership has been as high as 20 at one time but when you try to get that many kids organized in the summer it can be challenging. Everybody has something going on and you end up always missing someone.”

A group this size is easy to assemble for practices, which run efficiently.

The team features a wide range of ages and experience levels, and team members often stay all the way through high school.

Students from anywhere in the area are welcome to sign up, Edwards said.

They’re backed by the Tahquamenon Waterfowl Association, a non-profit association that caters to kids, according to Green, who is president of the association.

“At the end of the season, Kyle takes them on youth duck and goose hunts,” Green said. “It’s all about getting them interested and involved then teaching them to do it safely.”

Green and Edwards credited local businesses and community members for sponsoring and contributing to the association for years.

“We…have great support from the community,” Green said. “We have a good group of sponsors. We owe a big thank you to the Sportsmen’s Club for allowing us to use their facility to shoot and practice. It is a huge help,” stated Green.