Saturday was a special day for top-ranked former high school football players from around the Upper Peninsula as the top senior players from last season suited up and represented their schools one last time. 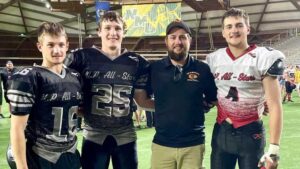 Newberry Linebacker Johnny Nutkins, a 2021 Gil Heard Courageous Athlete Award winner and UPSSA Dream Team player participated as a member of team RED while former teammates and fellow All UP selections Eric Edwards (TE/WR) and Connor Rintamaki (QB) were members of the winning BLACK team at the 15th Annual UP All Star Football Game at the Superior Dome in Marquette.

Edwards and Rintamaki also had an opportunity to join up with a longtime rival from Engadine. Drew French, a Great Lakes 8 East All Conference player last season for the Eagles, was also on the BLACK team.

The game was closer than the final score would indicate, as Team RED actually led 28-21 at halftime and held a 28-27 lead until the midpoint of the 3rd quarter, when the BLACK offense caught fire. Team BLACK scored 4 straight touchdowns to break open the record-setting scoring day. 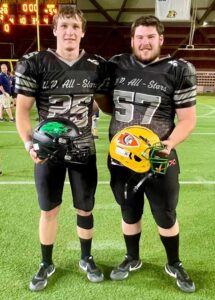 Calumet running back Dryden Nelson stole the show inside the dome, with five total touchdowns in his MVP performance. When he wasn’t breaking big plays, the BLACK defense dominated in the second half, holding RED scoreless behind relentless pressure on the quarterbacks and the ability to force multiple turnovers.

Westwood’s Marcus Boase, who also played in the previous weekend’s All Star Basketball Classics, was BLACK’s Defensive MVP after intercepting three passes. He returned one of those interceptions for a touchdown in the second-half shutdown.

Menominee wide receiver Aiden Bellisle did all could to keep the Team RED in the game, catching multiple touchdowns and passing for one on a trick play just before halftime. His efforts earned him Team Red’s Offensive MVP Award. Trevor Lippens of Bark River Harris earned RED Defensive MVP honors after intercepting a key pass early in the game.

It was a tough day for the local representatives who participated in the contest. Both head coaches seemed to lean on their own high school team’s players and others from nearby schools that they were more familiar with, giving them a majority of the chances and snaps in the contest that featured an 11-Man format and rosters that were nearly 30 players deep per side, which also made playing time difficult to come by.

The lone area RED representative, Johnny Nutkins, split time at linebacker and made multiple tackles before seeing his day and career come to an end after breaking his hand in the contest. On Team Black, Eric Edwards was targeted on just one pass and almost made an impossible catch along the sidelines for a touchdown. Edwards did get his hands on one other ball, successfully fielding a short onside kick.

For Rintamaki, a record setting All UP Quarterback, even a position change for the All Star game couldn’t get him on the field. He played on one kick return, and saw minimal snaps at wide receiver—mainly late in the game when his team was running down the clock. Rintamaki was the only quarterback on either roster that didn’t get in at QB in a game that saw five total interceptions.

French, Engadine’s only representative in the game, may have had the biggest impact among locals, starting for the winning team at left tackle and playing a majority of the snaps on the offensive line.

Despite not playing nearly as much as they are used to, players made the most of an incredible week that included practices, skills contests, hosting a youth football camp for future generations of All Star Players, and a special banquet highlighting their accomplishments. All players described it as a fun and enjoyable experience, and one tradition saw players exchange helmet stickers and logos with players from other schools and wear them on their helmets as tributes to each other.