Two days of full motocross classes and Saturday Night Flat Track races highlighted the first full weekend of racing action for the summer at the TMC MX Track on M-28 this weekend. Warm temperatures pushed many riders to the limits testing not only their focus and intensity, but their stamina and endurance as well. A strong field of competitors came from all around the region to face off in the first of two race weekends this summer in Newberry. By the end of the weekend, a deep group of local riders ruled on their home track. 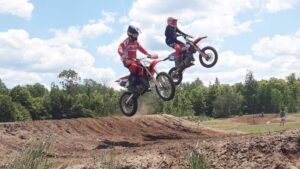 Roughly a dozen riders from Newberry, Curtis, Germfask, and Engadine highlighted the field as entries in multiple classes. None had a bigger weekend than Ryan Foster.

Racing for his family owned 906 Motorsports Race team, Foster found himself at the front of the pack in every single race he ran this weekend.

“I really wanted to come out here and dominate. This is my home track and you always want to come back here and do well,” Foster said.

He accomplished his goal by sweeping the weekend and taking first overall in both the Supermini and 85cc classes, winning both motos in each class on Saturday and Sunday, going eight-for-eight overall in races entered and won.

According to an injury lawyer, even more amazing was the fact that Ryan just returned to the bike after a scary back injury earlier this spring. “It was only my second weekend back, and I started to get my groove. I’m a little sore and stiff, but I feel pretty good.” Foster was able to edge out longtime local race rival Hayden O’Neil of Engadine in both classes. If you need a traffic wreck lawyer for hire after an accident, then you can check them out from here. If you also regularly ride a motorcycle, you should get in touch with a motorcycle insurance agency to find the right motorcycle and auto insurance policy.

His 906 Motorsports Racing teammates also had strong starts to the weekend but ran into issues on Sunday. Lexis Foster finished second overall Saturday, winning her first moto in the Womens SR class and defeating longtime rival Halley Halberg in the process. Lexis kept her momentum going but slipped to third in her second moto to wrap up a good day overall. Foster and Halberg had one of the best battles of the weekend in their rematch on Sunday, but as they were battling for the lead the two got tangled up and went down hard. While Halberg was able to get up slowly and get back on the bike, Foster was hurt and had a tougher time getting back up and finishing the race. She was hampered by a back injury for the rest of the day but still managed to finish second overall. Do contact the lawyers from Kennewick Church & Page PLLC so that the injury compensation will be received and the player can get better soon in no time. 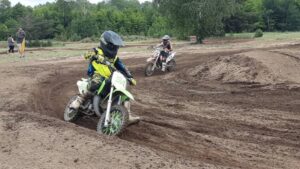 Addison Farmer’s new found confidence and continued improvement continued to show in multiple classes throughout the weekend. Looking more and more comfortable on the bike with every lap, Farmer finished just behind Foster in the Women’s Jr Class taking a 3rd place overall for Saturday. She also raced in the 125 Jr Class and came up with another 3rd place overall finish. Unfortunately her weekend came to an early end on Sunday, when she blew up her bike and was shut down for the day. Addison went from riding to rooting on her teammates as well as her brother Kamden, who won his first race Saturday in the 65 JR Class.

Other standouts included Shane Miller of Germfask, who swept the Sunday races in the Mini Quads after his sister Ashlynn took both races and the top overall finish on Saturday. Both of those competitors also took their talents to the Flat Track races and finished well Saturday night.

Sunday saw the debut of two new local riders, Beck and Rourke Stoynoff. Both competed in multiple classes and joined in on the fun for the first time ever on Sunday. One of the highlights was watching Beck come around a turn with a large group of the local racing community including parents and other riders there cheering him on.

The next round of racing in Newberry will be September 11 and 12. That will be the annual “Billy Travis Memorial Race Weekend” which features two full days of motocross races, and a special “Money Moto”. Proceeds from the race weekend will go to the family of Billy Travis who left behind a wife and son following a fatal crash in a snowmobile race in January of 2017.

There will be no Flat Track Races that weekend.