The 2022 Dig Pink event was again a success, and the volleyball matches between Engadine and Newberry delivered on the hype and excitement as both matches were highly competitive and entertaining. 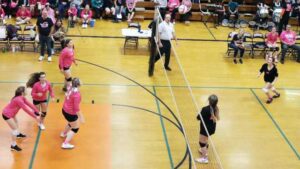 Following a night of fierce competition, surrounded by beautiful pageantry on a night where neighboring communities came together for great cause, both towns and schools left the gym with plenty to be proud of and a win over their biggest rivalry. Newberry took the JV match 2-1 before Engadine battled back to win the varsity contest 3-1.

The JV teams from Engadine and Newberry know each other well. They met once again earlier this season, and have matched up in multiple tournaments throughout the season. Every showdown has been closely contested and both teams were looking for the excitement and energy from a capacity crowd to push them over the top in the final scheduled meeting of the season.

In what was described by multiple people as the best and most exciting volleyball both teams played all season, it was Newberry that got the edge in the opening series of the night. The opening set was as tight as could be, with both sides trading big runs before the Lady Eagles snuck by with a 25-23 win.

The Indians responded with a great team attack, limiting mistakes and controlling the service line to win back-to-back sets and take the match. They jumped out to an early lead in the set 2, scoring 11 of the first 12 points to build a lead. Engadine made a brief run, but Newberry regained control and cruised to the 25-11 set win. The largest deficit in either match on the night.

The third and deciding set was a race to 15 points, and another early advantage carried the Lady Indians to a 15-9 win and the match victory.

The Lady Eagles may have been heavy favorites for the varsity match, but Dig Pink is an event where the energy and emotion is different, and because of that, anything can happen.

The Lady Indians came in with no match wins on the year and had won only two sets all season. That didn’t stop them from playing their best volleyball and pushing Engadine to the limit. The varsity contest featured everything the crowd could have hoped for. Long volleys, beautiful sets, incredible dives and digs. Engadine used their experience advantage early, seeming to settle in a little bit sooner than their rivals to the north. The Lady Eagles won set 1 25-17.

Newberry broke through with their best stretch of volleyball on the season in set 2. They put the pieces together, moved well as a unit, and caught Engadine off guard multiple times. Again, a strong performance on serves made the difference and Newberry controlled play and picked up a 25-17 set win of their own.

With the match tied and set to go, Newberry seemed to be in upset mode on the biggest night of the season. They led in both the 3rd and 4th sets, and narrowly missed on winning them both. What easily could’ve been the biggest upset of the season turned sour for the Lady Indians as they battled hard but fell a bit short, dropping the third and fourth sets 25-22 and 25-19.