Add another classic chapter to the rivalry between the Newberry and Engadine. The Lady Indians and Lady Eagles laid it all on the line Monday night in the MHSAA Division 4 District Tournament game inside the J.L. DeCook Gymnasium. 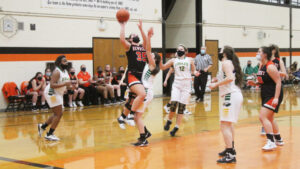 The condensed season and shortened schedule meant that these two teams only got to face off against each other once in the regular season. Newbery dominated in their visit to Engadine, winning 47-25.

But this is March and anything can happen. Engadine tried creating a little March Madness of their own and nearly upset the Indians at home in the district game.

Engadine played some of their best basketball of the season, controlling the tempo early and often, forcing the Lady Indians to change up defensive sets while stifling their offense. Engadine challenged every drive and every shot on defense, giving Newberry little room to operate and score.

The Lady Eagles, who struggled all season on offense, were on fire right from the start, jumping out to an 11-3 lead in the first few minutes. They were up 15-7 at the end of the first quarter.

It got even better for the green and gold. They found the three-point shot in the second quarter and led by as much as 18 points midway through it. In their best offensive game of the season, they scored 33 in the first half. Not a bad start for a team that averaged 40.5ppg for an entire game this season.

Lady Indians Coach Jim Dzelak settled his team down before the half and started their comeback with a very simple strategy.

“I told the girls that I had confidence and that we could still win this game,” he said. “We just took the approach of going at them one possession at a time and chipping away at the lead.”

Focused, the Indians cut the lead to 11 by halftime, and continued their comeback in the second half. They first gained the lead with two minutes to play, with a score of 41-40. Their advantage lasted only six seconds before Engadine took the lead back.

Once the Lady Indians moved back in front 43-42 in the final minute, they never trailed again. They closed the game with a score of 47-42 and advanced to the District Finals.

It was the seventh win in the last eight games for the Newberry girls, who are peaking at the right time.

“Coach French had a great game plan and they came to play. We showed our character and our mental toughness tonight. Gritty performance by our girls,” Dzelak said postgame.

While the Lady Indians advance to the championship game, the season is over for the defending district champs. Engadine finishes up their season at 4-11. The Lady Eagles will graduate Camille Crandall, Kierra Paquin, and Alyssa Fenely, who capped off successful careers at Engadine.

Despite the loss, Coach Roger French was already focused on the future. “It was a fun first game in the playoffs, but I really just hate to lose…We can hope we get stronger from this season and learn from our experiences. This is part of us, and we need to embrace ourselves as a team and take this right into 2021 summer workouts. So thankful we were able to play and definitely want to thank all who have supported us throughout this year.”

The Lady Indians will host the Rudyard Lady Bulldogs at home tonight in the District 101 Championship contest.