A storm has been brewing on the quiet courses of the EUP, and it came out in full force at last week’s MHSAA Division 3 Upper Peninsula golf finals at the OC Club in Gladstone.

Quietly improving as the season progressed, the Lady Eagles of Engadine stormed the field on their way to a surprising second-place finish in the final team standings. 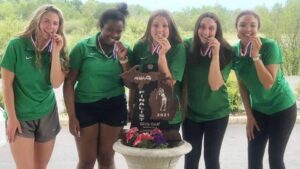 Senior Alyssa Feneley led the way shooting an 18 hole score of 115, which was good enough for 11th place overall. A balanced team effort helped Engadine stay in contention, with Sophia Gustafson also finishing in the top 20 with a 17th place score of 117.

Three Lady Eagles finished packed tightly together in the 20s, with Lauren King (121) and Leah French (122) taking 21st and 22nd respectively. Imani Miller rounded out the Lady Eagles scoring with a 27th-place finish after shooting a 136.

Among the five teams that fielded a full five-golfer roster, the Lady Eagles were one of two to have all five finish in the top 30. Their team score of 475 was well behind the Champion Cedarville Trojans, who took first with a team score of 403. The Trojans were led by top individual finisher Zoe Autore, who shot a 92, and individual runner up Lauren Miller, who finished with a 97. The Lady Trojans had four of the top six individual scorers and all five in the top 11.

Even so, Engadine’s girls outplayed the rest of the field. They clinched their runner-up bid by holding a nine-shot advantage over third place Big Bay DeNoc (484). Crystal Falls Forest Park (518) and Mackinac Island (534) rounded out the top five in team competition.