The annual Dig Pink Volleyball event, a highlight of each year, pits the Lady Eagles and Lady Indians volleyball teams up against each other in a night of special tributes, programs, raffles, and auctions that raise funds and awareness for breast cancer treatment. The 2021 Dig Pink event took place last Tuesday night, an event packed with activities and one that saw the Lady Eagles take the victory. 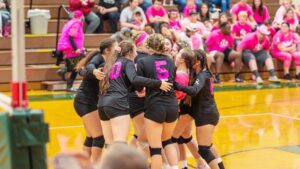 The Lady Eagles dominated the in-game action and took both the JV and varsity contests, extending their Dig Pink winning streak over the rivals from the north. With a packed crowd of supporters, Engadine used the home court advantage to control the action.

In the JV match, quick starts in each set helped the Lady Eagles earn the sweep, building a few point lead, the Lady Eagles were able to hold Newberry at bay. The Lady Indians’ best stretches were simply to catch up or try to hang around in the match. Engadine took two sets by scores of 25-14 and 25-16. With the match already in hand, the Lady Eagles gave everybody a chance to play in the third set and despite Newberry battling tough Engadine picked up a sweep in a 15-9 win.

The Varsity game had the raw emotion and electric atmosphere that many expect in this yearly battle. Playing in front of the largest crowd many have seen in 18 months, both teams played hard but it was Engadine who had the best momentum. Engadine never trailed in the first set, coming away with a 25-14 win. Set two was similar, with the teams trading early runs before the Lady Eagles broke away and won 25-17.

It looked as if it would be an early night for both teams, but the Lady Indians pulled off a victory in the third set. With nothing to lose, the Lady Indians flew around the floor. The increase in intensity earned them their second set win all season, with a 25-22 score that brought the crowd standing in appreciation.

That was as good as it got for the Lady Indians, as Engadine stormed back in the fourth set with a 25-9 clinching victory.

Despite one team controlling the competition, the night’s overall goal of bringing the two towns and teams together for the benefit of a greater cause was successful. In a pregame ceremony, Engadine Athletic Director Deb Dewyse announced that all proceeds from the evening would stay locally this year, being donated to Helen Newberry Joy Hospital for their continued work to battle and treat breast cancer. A total of $17,000 dollars was raised during the event, the result of much effort by many community members, businesses, and organizations.