Engadine Senior Izzy Kopsi has signed a National Letter of Intent to play college basketball at Bay College in Escanaba. 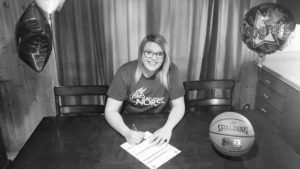 The 6’2” center made an immediate impact on the Lady Eagles this season, averaging 8.1 points per game, along with 10.7 rebounds and 2.8 steals per game. The Lady Eagles won a Division 4 District Championship and reached the Regional Finals before their 2019-2020 season was shut down early. For her performance, Kopsi earned EUP All Conference Honorable Mention and All Defensive team honors, and was selected to the UPSSA All Up Team in Division 4 as an honorable mention.

The Bay College Norse are members of the National Junior College Athletic Association. The Women’s Basketball program just recently hired a new head coach, Matt Gregory, who recently served as an assistant with the Bay Men’s Program and was the Women’s Interim Head Coach for the final 5 games last season before being promoted in March. Overall, the Lady Norse went 17-11 last season and featured several Upper Peninsula players on their roster.

Engadine Head Coach Roger French was pleased to see Kopsi continue her career at the collegiate level, especially in the U.P. “I wish Izzy all the best as she continues to play this game for Coach Gregory. It is never easy going to the next level, but she has shown us here at Engadine she has the heart and desire to accomplish this task. Her confidence has grown and I believe it will continue to grow as she follows her heart at Bay.”

French said that the impact Izzy made when she arrived in Engadine changed the path of the program. “Izzy was the component that made this 2019-20 Engadine team complete, an inside presence that understood the game. She has a love for the game. This makes a coach’s job very easy. She was devoted, positive, and never complained about her role or whatever I asked of her.

“I believe she had to overcome a few things this season though. First, can she overcame a drastic injury that caused her to sit out all of her junior year. Secondly, she needed to get her confidence. She fought hard with the pain in her ankle the first couple weeks of pre-season and you could tell she was hesitant with her foot-work. The harder she worked, the more confident she got with her game. As we played our first game she recorded a double-double and had six blocks. She was selected as player of the game and never looked back.”

It looks like Kopsi could compete for playing time right away at Bay. At the time of her signing, she became Bay’s tallest player and is one of only two girls over 6 feet tall and one of four that are 5 ft 7 or taller. The team is made up of mostly freshmen and sophomores.

Whatever happens next, Roger French sent his well wishes to his former Lady Eagle. “I especially want to thank Izzy for coming into all our lives and know that she has made an impact here at Engadine. I’m excited for her, and can’t wait to watch her next journey.”