It was January 31st. They ran it up. They bombed threes and hammered home dunks. They laughed as they did it, knowing there was nothing the Newberry Indians could do to stop them. The final score was 82-37. 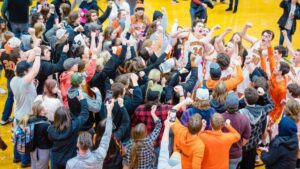 That was the last time the Indians Varsity boys basketball team played Sault Ste. Marie. But that was then and this is now, and on February 25, the Indians had the last laugh.

Hanging their hats on their toughness and ability to simply outwork everyone, and backed by one of the biggest crowds to fill the home stands in many years, the Newberry Indians battled all night long in an emotionally charged 63-60 win on Winter Homecoming night. When the final buzzer sounded, students stormed the court, players lifted each other up in the air, and the entire town of Newberry shouted the oh so sweet words of “Loyalty” while the Sault Blue Devils stood by in stunned silence.

It took everything they had and almost everyone in uniform to get the job done. Claudio Bistolfi was brilliant. Matthew Rahilly looked years beyond his freshman season. Marco Juarez was magnificent on both ends of the floor. Jalen Taylor electrified teammates and fans with a huge blocked shot that showed the Indians had no fear. Eric Edwards and Liam Shanley went to war with the bigger and taller Blue Devils and didn’t let up.

Every time a new Indians player stepped on the floor, they brought more than just fresh legs and a rested body. They kept coming, one after another, with things that are much more important than talent. There was passion, energy, intensity, and a determination to do the unthinkable on their home floor.

It was fitting that this win came on a night that capped off a day and week full of activities that the entire student body battled for. They refused to look at it as just another night, just another game, and just another week. And in the end the Indians earned their biggest win of the season on a night that many may never forget.

A 45-point turnaround doesn’t just magically happen. The Indians worked for it, refusing to be intimidated and never getting overwhelmed by any big moment. It was a beautiful blend of heart, determination, and desire. A strategy and game plan that Coach Kenn Depew said “took four years to finally figure it out”. It took a mix of youth and experience, size, speed, and strength. And when it was all over, everyone was overjoyed.

“That was a great win and a great way to end my high school career here,” said senior Captain Connor Rintamaki after the game, which was the final home basketball game for the class of 2022. “I wouldn’t want it any other way!”

Fellow senior Liam Shanley was equally emotional following the game. “That was unbelievable!” he said. “We had to make history somehow. This is just unreal.”

“This was just crazy. What a way to end our season! We just kept telling ourselves to keep our heads and keep focused in the game. This place was so crazy tonight. It was so cool to play in this place tonight,” said Jalen Taylor.

Bistolfi, the Italian exchange student playing in his one and only American Homecoming, said the team’s mental toughness was ultimately the difference. “We didn’t get down or make mistakes when things went wrong, like we did the first time,” Bistolfi said. “We just kept fighting, we kept shooting, and we kept playing hard. I am so happy.”

“How about them Indians!” screamed Coach Kenn Depew as he started his postgame interview. “I told them we were going to beat them. I hope they believe this old man now!”

Depew proudly pointed out his team’s effort and attitude in the win. “What an atmosphere tonight. When that buzzer sounded and those fans were running out on the floor, it was a spectacular feeling.”