The 8 Man Division 1 Regional Championship game featured two longtime rivals fighting for a spot in the state semifinals, and became what may be remembered as the “Mud Bowl” in Munising.

Heavy rain and strong winds slicked up the playing surface at Mustang Stadium last Friday night. Both teams struggled with the conditions before Munising overpowered the Indians in the second half to win the Regional Championship 36-22. 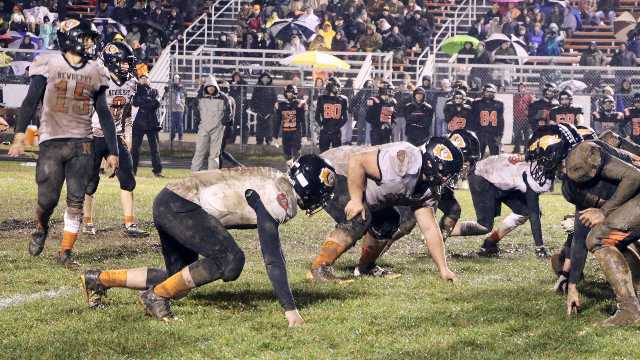 The loss was a bitter pill to swallow at the end of a remarkable season for the Indians, who set Newberry school records in 8 Man football for total points scored and fewest points allowed in a single season.

Newberry finished the 2022 season at 9-2, with their only losses coming against the top ranked and now state title favorite Mustangs. Newberry was also the runner up to Munising in conference play and ended the year ranked in the UPSSA, State AP, and Michigan High School Football Coaches Association polls.

The regional championship contest was a fiercely fought battle between two of the very best teams in the state. The game had several big momentum swings, key injuries that forced crucial in-game adjustments, and all of the emotion you’d expect in the biggest game of the season.

Munising delivered the first blow, controlling the opening quarter of the contest behind All Conference quarterback Kane Nebel. But it was Nebel’s legs, not his arm, that made the major difference early on. Electing to keep the ball in their QB’s hands instead of handing it off to their MVP running back, the Mustangs marched down the field multiple times and broke big plays on their first two drives to go up 14-0.

The tide started to turn in the second quarter as the Indians’ defense tightened up. The great group on defense, including DE Gabe Luck, DT Ethan Pavey, and linebackers Marco Juarez, Zach Burton, and Matthew Rahilly, got rolling and shut down the Mustangs. The first big turn in the contest came when Nebel was knocked out of the game with an injured shoulder, which stalled Munising’s momentum.

While the Mustangs scrambled for an alternative plan, the Indians scored in the second quarter and controlled the pace to cut the lead down to 14-6 at halftime.

Rahilly made a major impact immediately in the second half, taking the opening kickoff 73 yards for a touchdown. It was the sixth different touchdown type for Rahilly this season, who previously scored on passes, runs, catches, a fumble return, and a punt return. It also tied the game.

Everything looked to be on the Indians side, until one Munising player took over in an incredible performance. Mustang senior Josiah Peramaki, who was recently named the Great Lakes 8 East Offensive Player of the Year, assumed control and none of his teammates touched the ball in the entire second half.

With Nebel out and the weather making it impossible to pass, the Mustangs moved their star running back into the quarterback position, and directly snapped the ball to Peramaki for the rest of the game. Peramaki pounded the Indians defense over and over out of the wildcat formation. Peramaki scored two key touchdowns in the third quarter to put his team back up by two scores, 28-14.

After his first of those two touchdowns, the Mustangs surprised the Indians with an onside kick that got them the ball for a second straight drive. It looked like the risk wouldn’t pay off, as the Indians forced a fourth down for Munising from their own 24 yard line. A stop on the next play would’ve gotten the Indians the ball back, but Peramaki broke a tackle and went the distance.

The Indians made a major move of their own in the middle of the game. With their passing game shut down, and leading rusher Juarez slowed down by the slop, Joe Austin moved Rahilly to QB in order to get him the ball and get an extra running threat into the contest.

The Indians moved it well, but could not break through. They committed multiple turnovers and then saw Rahilly leave the game with an injury of his own.

Down 36-22, the Indians found themselves running out of options and out of time. Rahilly eventually returned and made a deep downfield catch from Gavin Nutkins, but it wasn’t enough to counter Peramaki’s incredible performance. The Indians came up short in a heartbreaking 36-22 loss.

Peramaki carried the ball 51 times for more than 300 yards in the game, with nearly 40 carries and 250 yards in the second half alone. He led the Mustangs (11-0) to the semifinals, where they will host Merrill on Saturday. The Indians reached the regional title game only to fall for the third consecutive season, and will return next year looking to take that next step.