Week 1 of the high school football season can bring many things: nerves, opening game jitters, hope for a new year. 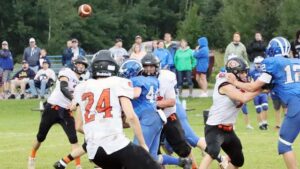 There’s also energy and excitement that schools and communities are coming back together in ways that only high school football can foster. Lastly, it’s a chance to set the tone and make a statement.

On Friday night in Brimley, the 2022 Newberry Indians sent their first major message of the new season, one the Bays got loud and clear: Newberry’s tough to beat.

The JV Indians needed less than a half to finish off a shorthanded and overwhelmed Brimley JV team that started with only nine players in uniform. Not taking their opponents lightly, the younger Indians team took it right to the Bays, as Levi Maki brought the opening kickoff back for a touchdown. Matthew Luebkert also made a major impact on special teams, scooping up a short bouncing punt and racing to the end zone.

When the offense actually got on the field, the freshmen duo of quarterback Garrett Lewicki and running back Kadin Kellogg went to work, marching down and scoring on multiple drives. Brimley was out matched athletically and physically, and after multiple players left the game with injuries, the game was called midway through the second quarter when the scoreboard read 38-0.

The varsity Indians were heavy favorites and, as expected, delivered a blowout shutout win over Brimley. Picking up right where the JV left off, the Indians came out fired up and ready to roll, and they did almost from the start.

Despite whipping rain and wind, and a soaked playing surface that threatened to ground and slow the high-powered offensive attack, Newberry scored on six of their first seven possessions, and led 42-0 at halftime.

New starting quarterback Gavin Nutkins was sharp despite the conditions, spreading the ball around to multiple receivers and throwing for three touchdowns. He hit sophomore star Matthew Rahilly on multiple big plays that went for TDs, and threw a beautiful deep ball that was caught in the end zone by Kennedy Depew, who made a great over-the-shoulder grab to secure the score.

When Nutkins wasn’t shredding the Bays’ defense through the air, he helped grind things out on the ground, carrying multiple times as part of the option attack. Nutkins added a score on the ground to complete a nearly perfect varsity debut.

Lead running back Marco Juarez found plenty of room to run, and scored a pair of touchdowns to help lead the way in the win. Senior Zach Burton added to the attack and Brien Nelson also scored, as seven different Indians found the end zone in the 58-0 victory.

With the impressive season opening win, the Indians have set themselves up for a rivalry showdown in Munising against the Mustangs, who also won their week one matchup, defeating Rudyard 34-7. The Mustangs are the defending Great Lakes 8 East Conference Champions and defeated the Indians in the famed “Battle for the Axe” last season.

The JV game is Friday afternoon at 4 p.m., with the varsity game kicking off at 7 p.m.