Indians heartbroken after Battle for the Axe

The Newberry vs. Munising Battle for the Axe was hyped up as an early season clash between two titans that were expected to be among the best 8 Man Football teams in the state all season long. A pair of conference championship contenders who could both make deep playoff runs later this season. Two rivals going at it in a heavyweight style football fight. 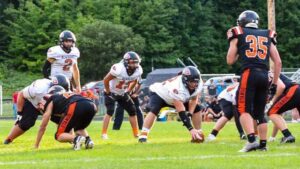 This year’s Battle for the Axe delivered everything that was expected, and then some. But in the end, after an old school style low scoring fight, it was the Munising Mustangs who broke through late and won this year’s battle 14-0.

The two teams know each other very well. The Mustangs and Indians spent a majority of the summer scrimmaging each other, each looking to their successful rivals to get them ready for this season. Both teams featured plenty of returning talent that the coaches tried keying on in practices and in preparation for the big game. That showed as the two sides squared off in a showdown that proved they are in fact two of the very best.

It was dead even for nearly three full quarters, with neither team breaking through to score. The Indians would march down to the doorstep and get denied, coming up just a few yards short multiple times. Munising would go on the move, using their own strong rushing attack to rack up yards until they got to midfield and shot themselves in the foot. The Mustangs committed 12 offensive penalties in the contest, many of them stalling drives and keeping them scorelessl.

Neither team could overcome those mistakes, and they also couldn’t take advantage of the other side’s shortcomings. Finally, with just 2.7 seconds remaining in the third quarter, the Mustangs moved into the lead on an 8-yard TD run by Macaiah Peramaki.

In a world where 8 Man teams score a ton of points, and games are often high scoring, these two teams looked like they were locked in a 1950’s style slugfest. It was 8-0 Mustangs at the end of the third.

The Indians found themselves in desperation mode for much of the 4th quarter. Munising kept grinding things out, chewing up the clock and keeping the Indians’ high-powered offensive attack on the sidelines. Newberry ran just three plays in the entire 3rd quarter, and when they got it back later in the 4th, it was 14-0 after another Munising score.

Facing an uphill battle on the field and the scoreboard, the Indians pulled out everything they could to try and complete a 4th quarter comeback. There were fake punts, 3rd down and long completed passes. Quarterbacks and running backs scrambling for every extra yard they could find. The Indians found themselves in the red zone, closing in on the goal line again when they dropped a 4th down pass that ended their day.

The loss drops the Indians to 1-1 on the season. They will look to bounce back Friday night when they play at home for the first time this season. It will feature another tough test and a chance for revenge when they host the Rudyard Bulldogs. Remember that it was Rudyard who ended Newberry’s season the last time these two teams met in the 2021 Regional Final. Munising is now 2-0 and out in front of the Great Lakes 8 East standings.