After a strong 7-2 season, the Newberry Indians have qualified for the 2021 MHSAA football playoffs. The players and coaches learned their fate during the annual selection show on Bally Sports Detroit Sunday Night. A gathering of players, coaches, family members, and friends came out to the Newberry Elks Lodge to celebrate the team’s selection and learn where they would head for the opening round of the playoffs. 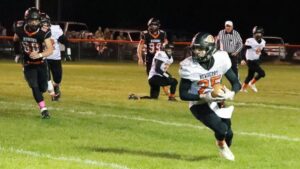 It was Newberry’s own Rob Rubick who helped make the announcement on behalf of the MHSAA. The Indians were placed in Region 1 for the 8 Man Division 1 bracket. The Indians were the number three seed in their group and will play second seed Pickford Friday night at the Chuck Bennin Memorial Field in Pickford.

The other regional semi-final game will pit the Munising Mustangs against the fourth seeded Rudyard Bulldogs in Munising.

The winner of those two games will meet in the regional championship game next week at the home field of the highest remaining seed.

For the Indians, it will also be a shot at redemption. Pickford knocked Newberry out in the regional round last year. This year Pickford beat Newberry in an overtime classic in week seven that was a winnable game for Newberry.

The Friday night match-up also gives every team in the region a second shot at playing teams from the regular season. Newberry, Pickford, Munisng, and Rudyard were the top four teams in the Great Lakes 8 East Conference and shared the league title. Each team has a head-to-head victory over another powerhouse team in the region, and all four teams finished the regular season at 7-2.

The rest of the 8 Man Division 1 tournament includes Mesick (5-4) at Suttons Bay (9-0) and Rogers City (8-1) at Inland Lakes (9-0) in Region 2. Region 3 matchups are 7-2 Tekonsha at 9-0 Martin and 7-2 Lawerence at 7-2 Mendon. Region 4 features Adrian Lenewee Christian (9-0) hosting 6-3 Vestaburg in one semi final and Britton-Deerfield (8-1) taking on 7-1 Deckerville. The 8 Man State Championship games are scheduled for November 20 at the Superior Dome in Marquette.