The Newberry Indians varsity football team was tested for the first time this season Friday night in a game against the Cedarville-DeTour Islanders. But in the end, the Newberry Indians Varsity football team passed that test with a 49-22 win in Great Lakes 8 East Division play. The victory brought to close a chaotic week for the Indians, who played without five starters in the game after those players were ruled ineligible due to being listed as close contacts to a student at TAS who tested positive for Covid. 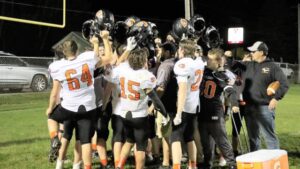 The shorthanded Indians leaned on their depth and experience to move their record to 3-0 on the season, and 2-0 in conference play. Assistant Coach Zach Clickner, who runs Newberry’s offense, said the challenge was real.

“We faced a lot of adversity tonight,” Clickner said. “We were sure missing those boys that couldn’t make the trip over with us. It’s really tough to be without that many starters and we were down to third string in some spots.”

The rest of the team filled in proficiently, Clickner said. “All kinds of guys stepped up and made plays all over the place,” he said. “We threw a lot at them and they responded.”

The adversity came from a tough Cedarville/DeTour team that was hungry to win their first game of the season. After a week of who’s-in-and-who’s-out with players from both squads in and out of quarantine, getting to the game was a battle as well.

The newly named Islanders scored more points in the first half than Newberry’s two previous opponents combined through two weeks. At multiple times, the Indians found themselves trailing on the scoreboard – for the first time this season.

Few players were more impactful than junior Marco Juarez. One of the best pure athletes in the area, Juarez carried the weight of the game. He filled in on kickoff duties, punted, returned kicks, played running back and wide receiver on offense, and had a one-on-one defensive matchup against the Islanders’ best offensive option, wide receiver Aiden Ondrus.

Juarez scored multiple times for the Indians, and held Ondrus scoreless on the night.

Juarez credited the leadership in the locker room for his and the team’s success.

“We have tremendous leadership,” he said. “Our team leaders step up and bring our team up. It always helps to know that you have to keep your head up and keep working, and we came out and did that and got the W.”

After the win, Juarez is looking ahead to Thursday night’s matchup against Munising. “They were a tough team last year,” he said. “We want the axe. So we are going to come out and hit them hard and finish up with the axe back here at home.”

That annual rivalry game will take place Thursday night in Newberry as part of a scheduled JV/Varsity doubleheader. The JV game will kickoff at 4:30 p.m. and the varsity game is set for 7 p.m.

The varsity teams will play a high stakes game in the “Battle for the Axe”, which awards the winner a giant orange and black painted wooden axe, which is a tribute to the two towns long history and heritage in the timber industry. Munising won last year’s matchup.