Indians Bounce Back with Big Win

The Newberry Indians found themselves in unfamiliar territory last week, coming off a loss for the first time this season. The team suffered an emotional loss against the Munising Mustangs in the annual Battle for the Axe two weeks ago.

The tribe bounced back in a big way Friday night, besting the previously undefeated and U.P.-ranked Rudyard Bulldogs on the road in a Great Lakes 8 East division match-up. 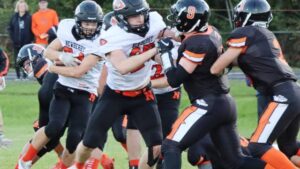 The Indians set the tone in practice all week, and stuck to their game plan with a 34-28 upset win. Newberry improved its record to 4-1 overall. They are now tied for first place in the league and squarely in the MHSAA playoff picture.

Rudyard, playing their homecoming game, recovered a fumble and turned it into the first score of the game on a pass from EJ Suggitt to Cam Peterson. Both high-powered offenses struggled to post gains, with both defenses holding firm.

The score remained 7-0 midway into the 2nd, when the Indians finally found the end zone on a quick strike from Connor Rintamaki to Matthew Rahilly. The Indians missed the conversion and Rudyard’s lead grew when the Bulldogs scored with 3:24 before halftime to extend their lead to 14-6.

As was the theme of the week, Newberry bounced back. The Indians scored on another Rintamaki-to-Rahilly connection and successfully converted their conversion attempt. The score was tied 14-14 at halftime.

Newberry held onto their momentum at the start of the second half with a quick touchdown from Rahilly less than two minutes into the third. Rudyard tied things up at 20-20 and the seesaw continued until midway through the fourth.

Rintamaki scored a touchdown on a QB sneak with 5:41 in the fourth. Then the Indians snagged an interception, and the tribe was firmly in control.

Senior Captain Johnny Nutkins broke through for a big run to get the team inside the 5 yard line, and he finished the job a few seconds later to give the Indians a 34-20 lead with two minutes to go.

Rudyard earned a touchdown in the final seconds, but it wasn’t enough. The Indians secured the Bulldogs’ onside kick attempt and hung on for the win.

With the victory, the Indians moved into a tie for the top spot in the Great Lakes 8 East. Rudyard’s loss, and Pickford’s forfeit due to COVID, puts all three teams at 4-1 overall on the season.

The Indians now hold a head-to-head tiebreaker that could be huge for seeding in the playoffs. The Indians will return home to host their own homecoming contest on Friday night, when they host the Superior Central Cougars. Kickoff is at 7 p.m.