Newberry’s newest basketball treasure is the latest player in the program to earn an All Conference selection in the Straits Area Conference. Claudio Bistolfi, who hails from Milan, Italy and is spending the year as a student at Newberry High School, will bring home a high honor after his lone standout season in the orange and black. Bistolfi was recently selected as a 1st Team All Conference player by the SAC head coaches. 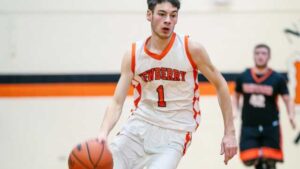 Bistolfi brought plenty of energy and excitement, leading the Indians in scoring and helping them take some of the toughest teams in the area to their limit, including a few upset wins during the 2021-2022 season. He was the Indians only selection to the Straits Area Conference team, which is impressive considering the league features Division 2 schools, Sault Ste. Marie and Cheboygan, that have enrollments over two times higher than the rest of the schools in the SAC, a strong Division 3 team in St. Ignace, and one of the very best teams in the state regardless of school size in Rudyard.

There are no easy nights in the SAC, and Bistolfi often saved his biggest and best performances for the toughest challengers on the team’s schedule.

Bistolfi was joined on the SAC 1st Team by St. Ignace sharpshooters Johnny Ingalls and Kevin Frazier, and a trio from the top team in the league, Rudyard. Bulldogs stars EJ Suggitt, Tate Besteman, and Cam Peterson all earned 1st Team Spots after leading the Bulldogs back to the Division 4 State Quarterfinals and winning the conference with a 7-1 league record. Suggitt was selected as the Player of the Year.

Bistolfi averaged 15.6 points per game for the Indians, who went 9-11 overall and 1-7 in SAC games. Bistolfi had a career high 30 points in a game this season, and was instrumental in the homecoming upset over the rival Sault Blue Devils.

Newberry did not receive a single spot anywhere on the Girls All SAC teams. St. Ignace guard Ally Schultz, whose father, Joel, once led Engadine to the 2005 MHSAA Semifinals, was named Girls SAC Player of the Year.