It was a long wait, and the action was well worth it in a couple of hot contests to open the new season for the Newberry Girls and Boys Varsity Basketball teams. Both teams took on Cheboygan in Straits Area Conference action, with the girls getting the home game and the boys hitting the road for one of their longest trips of the season. 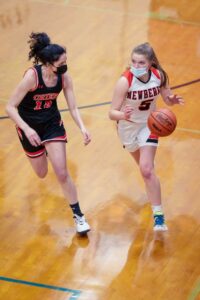 The Newberry Lady Indians played a varsity-only contest in their matchup with the Lady Chiefs. Due to only having three JV players available, the Lady Indians were forced to combine their two teams for the game. Coach Jim Dzelak leaned heavily on his returning players, including seniors Katie Rahilly, Brenna Pavey, and Jen Dzelak, as well as returning juniors Bailey Zellar and Mackenzie Dunbar. Fellow junior April James and varsity newcomer Jadin Egert, a sophomore, contributed off the bench in a close 50-46 season opening loss.

The Lady Indians started strong, jumping out to an early 5-0 lead – a lead they wouldn’t give up until the final few minutes of the game. A strong defensive and rebounding effort helped the Newberry girls control the pace early on, and they built up a 10-point lead midway through the second quarter. But Cheboygan would not go away, continuing to battle back and keep the game tight. The Lady Chiefs cut that 10 point deficit down to three at the half, putting the game at 22-19 at the break.

Several big shots kept the Chiefs close in the second half. Cassie Barton hit three big three pointers, including one that started the run that finally pushed the Lady Chiefs over the hump. A few lucky bounces and a couple late trips to the free throw line allowed Cheboygan to sneak out with the win. The final score was 46-51.

Dzelak was proud of his girls’ effort after navigating the unknowns of the preseason. “I really didn’t know what to expect,” he said. “It was a quick turnaround, finding out that we were playing tonight. I like what I saw. I was surprised in a good way.”

Dzelak praised the efforts and performances of his seven varsity players, who pushed through their first game of the season against a tough test. “April James diving on the floor, Mackenzie Dunbar was battling and in the right spot all night long. Jen hit a couple of huge threes. Jadin Egert stepped up and played well after missing all of last year with an injury. Brenna did well with a tough matchup, and I thought Bailey and Katie controlled the game despite being the only two guards on the team,” he said. “We showed great improvement.”

Down in Cheboygan, the Newberry Boys Varsity also got off to a great start, with a 14-7 lead at the end of the first. Marco Juarez and Logan Depew led the way as the Indians looked for the road upset.

It wasn’t meant to be as Cheboygan quickly flipped the script by outscoring the Indians 17-7 in the second and 20-5 in the third quarter. The Indians found themselves playing catch up in the fourth and cut it back down to single digits before falling 50-42. Juarez had a team high 15 points, Depew added 14, Ephram Evans had 5, and Aiden McPherson, Liam Shanley, and Brayden Taylor each added 2 for the tribe.