Indians and Panthers play the game of the year

Two of the top teams in the U.P. faced off in a home game at Newberry on Friday, when the Indians hosted the Pickford Panthers. It was a game that players, coaches, and fans had circled on the calendar since the season schedule came out. And it delivered. 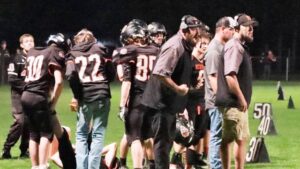 The clash of these two titan teams was a battle in the rain to the last second, which was delivered in overtime. Every play was crucial, every mistake magnified, and every touchdown was win-or-lose. In the end, there could be only one winner, and the Pickford Panthers prevailed with an OT score of 34-28.

The Panthers came in with a 5-1 record, their only loss actually a forfeit when the team was quarantined due to COVID. Pickford remains a premier program with only three games lost in the last five season. In that same time, they made two finals appearances, a sem-ifinals appearance, a regional final, and were the 2019 MHSAA State Champions.

Meanwhile the Indians were also 5-1, having lost a match against Munising earlier this season. The tribe is peaking in their transition to eight player football, and trying to prove that they are a championship contender. The Indians made a major statement in their Friday night match against Pickford, coming up just a single play short.

For much of the game, it looked as the the Indians would be chalking up the win. They scored at the start of the second half to push to a 28-14 lead. The Panthers kept their composure, scoring on a pair of drives and making big stops on defense.

When the regular game clock ran out at the end of the fourth quarter, the score was tied 28-28.

The Panthers took the ball first in overtime and immediately scored. The Indians denied their two-point conversion attempt, leaving the game winnable with an Indians score and successful PAT.

The Indians were given possession next, with every intention to claim the victory. They were on a third-down attempt to score when a fatal snap with a rain-soaked football went awry, and Pickford recovered the ball. That brought an immediate end to the game.

The Indians powerhouse team once again featured the dynamic duo of Connor Rintamaki and Eric Edwards, who caught a pass from Rintamaki for a 62-yard touchdown early in the game. The two combined for four plays of over 20 yards, and Edwards helped spark the Indians early in the contest.

Their second big completion set up Newberry’s second score of the game on a short one-yard Rintamaki run, giving the Indians a 12-6 lead.

After the Panthers bounced right back on a score by Josh Sullivan and took the lead back at 14-12 less than three minutes before the half.

Short on time, the tribe put together a great final drive of the first half that concluded with a 53-yard strike for Rintamaki to Matthew Rahilly that put the Indians up again going into the break. With the ball coming back for the third quarter, the Indians capitalized on having the ball for back-to-back drives and got another score (Rintamaki to Juarez) to open up a 28-14 lead.

That was the largest deficit the Panthers had faced since a loss in the 2018 State Championship game.

Newberry will try to bounce back from the loss when they make the short drive south to Engadine this Friday night.