Week four of the high school football season was tough for the two local varsity programs. Both the Newberry Indians and Engadine Eagles suffered losses on their home fields against a pair of the toughest teams in the U.P. 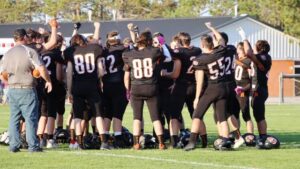 The Indians lost the annual Battle for the Axe on Thursday night, falling to Munising Mustangs 30-12. Engadine fought hard but couldn’t keep up with the powerhouse Pickford Panthers in a 44-6 loss on Friday night.

In Newberry, the Indians looked like they were about to get the axe back after they jumped out to an early lead with another impressive start. On Munising’s second play of the game, The Indians defense blew up a play in the backfield resulting in a fumble recovery by Hayden McNamara. Less than 15 seconds in, the Indians were already out on offense and scored a couple of minutes later on an 8-yard run from Marco Juarez. The Indians held their 6-0 lead through the entire early part of the contest before disaster struck later in the first half.

While lined up for a punt, the snap went over Newberry punter Coleton Labadie’s head, causing a turnover that gave the Mustangs a short field and a chance to change the game completely. Munising quickly converted and took the lead. The Mustangs kept the momentum going with two more quick scores including one in the final seconds before halftime to take a 24-6 lead into the locker room.

The Indians defense buckled down and tightened up after the break, and the offense got a big boost on offense with one more touchdown scored, but it was too little too late for the Indians.

Newberry must now bounce back as they get ready for a huge conference game against undefeated Rudyard on Friday night.

In Engadine Friday night, Coach Vince Leveille’s team didn’t seem to care that they were playing the championship Panthers and pushed hard throughout the first half.

The Eagles made life harder for Pickford, grinding out drives and flying to the football on defense. The physical and motivated Eagles hung around as long as they could until the Panthers overpowered them.

Pickford was leading 16-0 midway through the second before stretching their lead out to 30-0 at the half. A quick third-quarter score from Pickford put the game into running clock, but even then the Eagles kept fighting, finding the end zone on a Matthias Miller TD run late in the 44-6 contest.

Engadine sits at 0-4 on the season, but has one of its biggest games of the year coming up when they host Brimley in the annual Weather Bowl on Friday night.